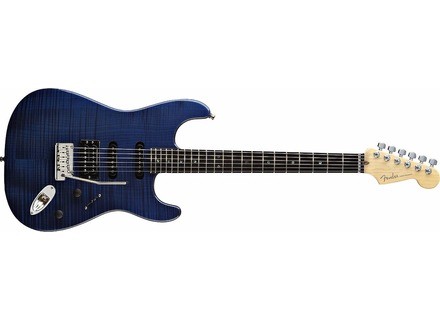 Voir les autres avis sur ce produit :
Afficher la traduction automatique
Afficher l'avis original
This seems to be an attempt at Fender trying to enter the more boutique market that they never truly tapped into. The guitar isn't really a true strat; it's more of a superstrat. It's a bit odd as it's not quite a Fender, and it doesn't sound exactly like a Fender, yet it still has that kind of Fender vibe going on. The guitar features an alder body with a flame maple top, a maple neck with an ebony fretboard, 22 medium frets, a 2 point tremolo, dot inlays, HSS configuration, one volume, one tone and a five way switch.

The flame top on this looked great. It could easily rival pretty much any other flame top you've ever seen on the boutique market. The finish on this was nice, as well. The frets were a bit of an issue, however. While they were level, there were some issues with them not being fully crowned. I would have liked to see them crowned a bit better and polished up some more. The ends were nicely beveled, so no issues there. The ebony on this was nice and dark without any streaks, and it didn't seem to have been dyed. The bridge on this is great, but don't expect it to hold tune like a floyd rose. It's great for minor to medium work.

The guitar had a Duncan Custom Custom swapped into the bridge, but the singles were the standard SCNs that Fender utilizes in these guitars. The Duncan Custom Custom was super thick sounding. It was like EVH in a pickup, and you could get some awesome sounds out of this thing. It had enough output for metal, but it was spongy enough to do some great blues lead lines as well. The middle pickup split nicely with this, and I could get some great funk tones. The neck + middle was pure clean tone heaven, and it happens to be my favorite sound in this guitar. The neck was super powerful, and I had no issues playing metal lead lines with that pickup. It's not the most classic sound, but it delivered.