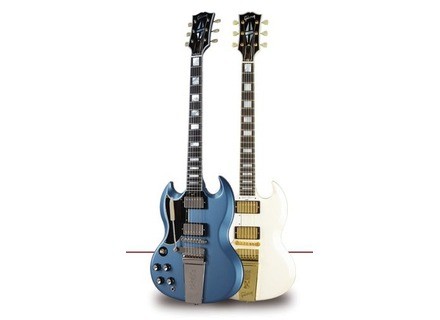 Voir les autres avis sur ce produit :
Afficher la traduction automatique
Afficher l'avis original
Elliot Easton is the guitar player for the band the Cars. He is left handed and has been playing SG's for many years. Gibson has decided to give him a signature guitar that will come in lefty and righty. His guitar is a 61 Les Paul Custom two pickup model with a Maestro tremolo on it. The unique thing about this guitar is that it comes with a cool rare color Pelham blue. The guitar has the Les Paul Custom neck with the block inlays on an ebony fretboard. It has the custom split diamond headstock. The neck and the body are both made of mahogany. The guitar has the super thin early 60s profile neck which Gibson put on SG's at the time. It has lower profile vintage feeling frets. The guitar comes with a set of 57 Classic pickups which I think are some of th best pickups Gibson makes. Each pickup has its own volume and tone control and there is a 3 way switch. It is funny that it has to be a signature model for a left handed person before Gibson makes a lefty guitar that isnt at the bottom of the model line up. With this guitar I think they should overcharge for the righty models since this is a primarily lefty guitar.