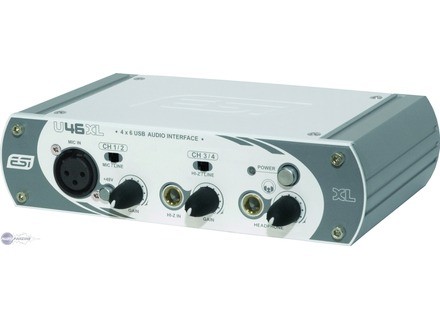 Voir les autres avis sur ce produit :
Afficher la traduction automatique
Afficher l'avis original
The ESI U46 XL is a multi-purpose 4 in and 6 out interface that will work on almost any system. I have used it on xp, vista and I have seen it used on a mac. That is great that you can use it on almost all system set ups old or new and it will still work great. The ESI U 46 has a direct wire feature that will allow you to record stuff from one application to another application internally. At the time I haven't came across another interface that could do that when I first got this , but since then I have found a few more that have added that feature. That feature is just a extra cool thing and its nothing that would ever be a deal breaker with me purchasing a interface system.

Installing the drivers for this interface is easy , and using it was even easier. Just plug in the USB 2.0 drive and if you loaded up the right drivers your system will recognize it and you will be good to go with your new interface. You can start recording in signals right away no matter what DAW you are using at the time. It will recognize the ESI U 46 XL and it will give you no problems.

The ESU U46 is built tough and strong, it wont break on you if it slips off your workstation and hit’s the ground, I have done this several times by accident and it didn’t do anything to the unit. it’s a monster and will continue to work for a long time. Its made of an aluminum case and its pretty stylish and sleek. When you purchase this you do get a copy of Cubase LE just in case you don’t have a daw or anything to record with. So this is a basically a whole package. You just need the mic and you can record stuff right away. Its pretty affordable too.