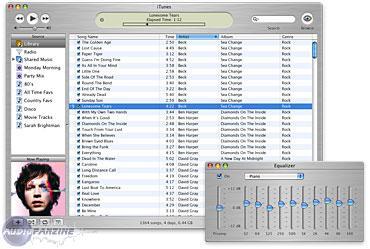 (contenu en anglais)
Afficher la traduction automatique
Afficher l'avis original
All of the eggheads in the internet can argue about the technical this' and that's of their favorite media player, but being a bit of an egghead myself, and having used a lot of these esoteric programs like WinAmp and Foobar and all the others, I sometimes wonder what actually makes them better. I can't figure out why past me condescended to the use of iTunes; I guess some techno-geek told me that if something can't play esoteric audio and video files, that it's an inferior program.

Apple's iTunes is a masterpiece for one reason: its GUI (Graphical user interface for the computer illiterate). If you've ever used an iPod, which you have, iTunes has a menu a bit like the iPods, but of course, the quality and comprehensiveness of the menu is scaled to the quality of a computer. It organizes your music perfectly using the ID3 tags of the files, so you'll be able to find anything you like even if you just remember one piece of information about the music.

And before I go any further, remember the store. Apple's model for downloaded music is genius, and before you write it off as just something that exists in the world, remember the "revolutionary" methods that were attempted by all the other companies in the world before Apple decided to start selling songs at 99 cents per? Yup.

And to round it off, iTunes does include some "features" that were originally very esoteric. Like equalization, which you can store different presets of for different things. It also does play a few of the more obscure files, not that most people would need them, and even includes a tool to convert them to mp3 files in case you're a bit obsessive compulsive like me.