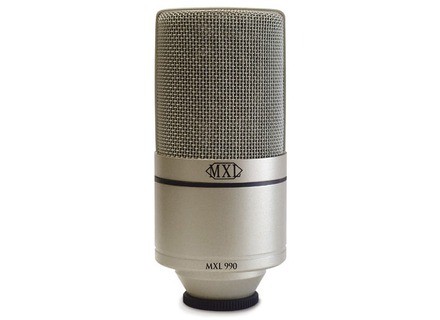 Acheter ce produit neufVoir tous les prix >
Voir les autres avis sur ce produit :
Afficher la traduction automatique
Afficher l'avis original
I wasn’t too sure about the MXL 990 at first just because of its appearance. Most mics that look like this sound horrible and they make them look like this (really goldish and shiny) to attract people then once you get it you realize how bad of a decision you just made. But that wasn’t the case with the 990 by MXL. Now I wont say that the quality you will get will blow your sox off, but for the price that it cost brand new there are few other mics in that range that can even compete with it.

The best thing about this mic is that me having a deep voice sounded great on it, which was a plus because its always so hard to find a mic for my low tones that I sing and hum in. Most mics just don’t pic up the low’s too clean and they end up sounding really muffled. But the MXL 990 specializes in picking up those low tones and base tones. I have not used it on my acoustic or any other instrument yet, but they claim that the MXL 990 is an “all purpose” sort of a mic. I have used it for over a year, but I do not own it anymore now. I have gave it to a friend who needed something to record on and I have a lot of mics so it didn’t hurt me to give him one to use. He loves it and hasn’t complained yet. I just cannot stand the way that it looks, it just seems really cheap looking to me. I am very thankful that it doesn’t sound like it looks, which is pretty much what I thought was going to happy. Overall, it’s a solid mic for a decent price and it will not disappoint you.