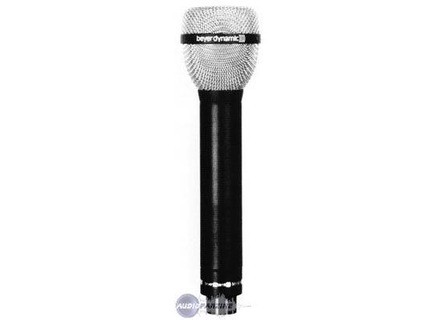 Voir les autres avis sur ce produit :
Afficher la traduction automatique
Afficher l'avis original
My school band had this mic for years and I didn’t even pay it any attention untill one day I wanted to record some brass at home with some friends and my brother. So I actually paid attention to what mic we where using for our concert band at school many years ago. So after seeing this mic, we saved up our money and managed to purchase one of these in around the fall of 2006 we where able to have enough money to get a used one, but it took us a while to find someone who was actually selling one of them. Finally we got on an eBay auction for about half of the price that it cost brand new because the seller had scrapped it up and dropped it a few times and he even shipped it for free from Europe . When it arrived it wasn’t the prettiest mic because of the abuse that he gave it but after playing some trumpet on it I was amazed on how good it sounded and more amazed that we actually purchased the same mic that our school was using for concert band. I couldn’t believe we actually had the same mic sitting in our basement and using it for our own semi jazz music recordings.

The mic proved a very crystal clear sound and very accurate, we didn’t even touch any of the eq controls because we wanted the most natural sounding mic that we could possible have. At the time I thought his was the best mic I would every have for brass, well that was many years ago, and since then I have moved on to many other mics that sound way better. But at the time, the Beyer Dynamic M69N was perfect for us and I have no regrets using it.