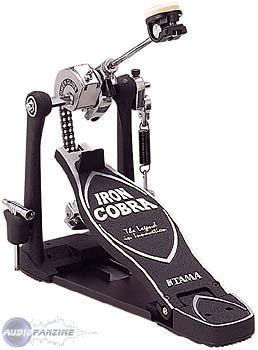 (contenu en anglais)
Afficher la traduction automatique
Afficher l'avis original
I owned the Tama Iron Cobra Power Glide Kick Pedal for a little over a year, and I ended up replacing it with the Pearl Eliminator. The pedal is very solid, and has nice action, but not for very long. After constant use at practices and gigs, the action slowed, and the pedal became less smooth. It was very well built, but even after I greased all the hinges and such. It still wasn’t as good as it was.

This was the pedal I played when I switched from a single chain driven pedal to double chain driven one, and there is a large difference in the action. But when comparing this to other double chain drives, it falls short to the DW 5000 and the Pearl Eliminators, in my opinion. The action on these two pedals is much smoother than on the Iron Cobra. I believe this may be resolved by buying the Rolling Glide, but I have never personally played on those.

The weight and the overall longevity of the pedal is where I have problems. The attack and intensity of the pedal are amazing in the first stages of use, but over time the action gets less smooth and the pedal starts to squeak, causing for it to be a handful while recording. The weight isn’t a big problem, it just weighs more than others, but that is the price you pay for having a pedal built like a tank.