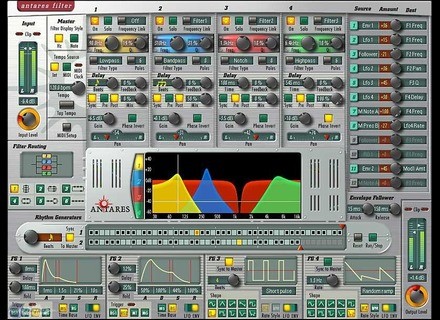 Voir les autres avis sur ce produit :
Afficher la traduction automatique
Afficher l'avis original
Installing the Antares Systems Filter plug-in was a quick and easy process and was one without any troubles at all for me. I didn't have any compatibility issues and really encountered no problems whatsoever along the way with this plug-in. The interface of the plug-in is very complex as it has almost an endless amount of parameters and sections to it. While this adds to the incredible versatility that this plug-in has, it also makes it harder to learn the plug-in inside and out. The manual is probably a good idea to have around while trying to learning this in depth plug-in.

I am currently running the Antares Systems Filter plug-in on a Mac Book Pro that has a 2.2 Ghz Intel Core 2 Duo processor and 4 GB of RAM. I run Pro Tools LE 7.4 with a Digi 002R audio interface and within this configuration I've never had any issues running the plug-in. This being said, I only use this plug-in sparingly and don't ever use more than two or three of them at a time. For this amount of use I've never encountered any problems, but I would imagine that if you used much more than that that your computer wouldn't be able to handle it as the plug-in does take up a decent amount of processing power. It really just depends on what kind of system you are running this plug-in with.