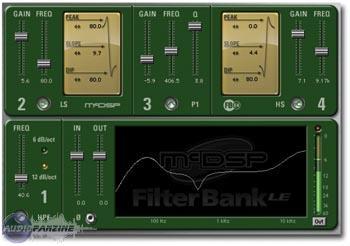 (contenu en anglais)
Afficher la traduction automatique
Afficher l'avis original
The McDSP Filter Bank LE was quick and easy to install as I had no compatibility issues. I bought this plug-in with the McDSP Project Studio LE bundle so it was transferred directly to my iLok and I was able to have the plug-in up and running within a few minutes. Since I bought it electronically it didn't come with a manual, so I can't speak to how sufficient it is or not.

I am running McDSP Filter Bank LE on a Mac Book Pro that has a 2.2 Ghz Intel Core 2 Duo processor and 4 GB of RAM. I run Pro Tools LE 7.4 on a Digi 002R audio interface. With this configuration I have had no problems running a few of these at once in Pro Tools as I have been able to run up three or four of these at once. I have never had a use to use more than this amount of these at once so I don't know how well it would run with more than four or so of thee. Overall, this plug-in has been stable with my configuration.

I've been using the McDSP Filter Bank LE for about six months and have found it to be a useful EQ tool. It has four bands, each with gain and frequency sliders, the first of which is a high pass filter. It also has a great graph that makes it easy to see where you are cutting and boosting. It is overall easy to use and has a clean tone to it. When used right you can really get great results with plug-in. The price was dirt cheap for me as I bought it with a bundle. I definitely recommend checking out this plug-in and the McDSP Project Studio LE bundle as a whole.
La banque de filtres LE McDSP a été rapide et facile à installer que je n'avais aucun problème de compatibilité. J'ai acheté ce plug-in avec le bundle de McDSP Project Studio LE donc il a été transféré directement à mon iLok et j'ai été capable d'avoir le plug-in en marche en quelques minutes. Comme je l'ai acheté électroniquement elle ne venait pas avec un manuel, donc je ne peux pas parler à la manière dont elle est suffisante ou non.