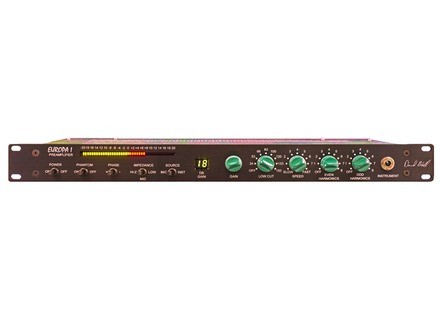 Acheter ce produit neufVoir tous les prix >
Voir les autres avis sur ce produit :
Afficher la traduction automatique
Afficher l'avis original
Single Channel. Adjustable gain. Number of filters. Speed control. Harmonic control. This is an analog sounding preamp with modern appointments. There's really two schools of preamps, which are the vintage flavored ones and the modern ones. The Europa is a new design that isn't a replica of any old unit or a ripoff, but it has a very much vintage sound despite the modern design.

I work in a studio part time which has a couple of these and we use them quite often. The Europe gives you a lot of options. By using the speed control and harmonic control you can go from a warm modern sound to a very vintage almost lo-fi type of preamp. Usually it sounds best when the controls are set to a relaxed setting. unbelievable clarity coming out of this preamp. Whether you just want a pristine high end mic preamp or you want a box that can give your recordings that old school lo-fi sound this is going to do it. You might think that this is a jack of all trades master of none kind of preamp but that's really not the case. The controls are super sensitive and no matter how extreme you get with some of the vintage flavoring it sounds great.

Tracking vocals through a Kiwi mic, this preamp sounds golden. Honestly it doesn't get much better. Obviously if you pay this much for a preamp you want it to be able to perform in a studio, but I feel like it's almost a crime to have the Europa if you aren't going to use the lo-fi features. I think a lot of indie bands could make good use of this unit. Turn the speed down and harmonic controls up and it gets VERY vintage sounding, perfect for the 60's inspired stuff that's coming out now. Personally I like my vocals fairly clean and without coloration but it depends on the style. The point is this unit can do both and that's something really great you don't see too often in modern preamps. Props to Dave Hill for making such an easy to use and great sounding box.
Single Channel. Gain réglable. Nombre de filtres. Contrôle de la vitesse. Contrôle harmonique. Ceci est un préampli analogique consonance avec les rendez-moderne. Il ya vraiment deux écoles de préamplis, qui sont les anciennes saveurs et les modernes. L'Europa est un nouveau design qui n'est pas une réplique de toute l'ancienne unité ou une arnaque, mais il a un son beaucoup millésime malgré le design moderne.