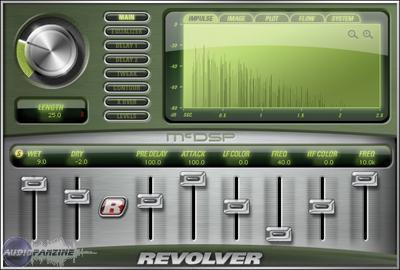 (contenu en anglais)
Afficher la traduction automatique
Afficher l'avis original
The McDSP Revolver reverb plug-in was quick and easy to install. I bought it electronically as part of the McDSP Project Studio LE bundle, and had it up and running with my iLok within a matter of minutes. I had no compatibility issues with my machine and have had no problems with it since installing it. I don't have a manual for this, and I'm not sure that one even exists - it is not needed as the plug-in is easy to figure out on its own.

I am running the McDSP Revolver reverb plug-in on a Mac Book Pro that has a 2.2 Ghz Intel Core 2 Duo processor and 4 GB of RAM. I use the plug-in in Pro Tools LE 7.4 that runs off of a Digi 002R audio interface. I haven't had any problems running this plug-in with this configuration, as it has always run smoothly. I have never run more than one of these at once because I put it on an auxiliary track and send the signal from the tracks via buses. This saves processing power and I do it with all reverbs and delays. This being said, I don't think you would have too much trouble running a few of these at once if you wanted, but it really depends on what kind of machine you are running this on.