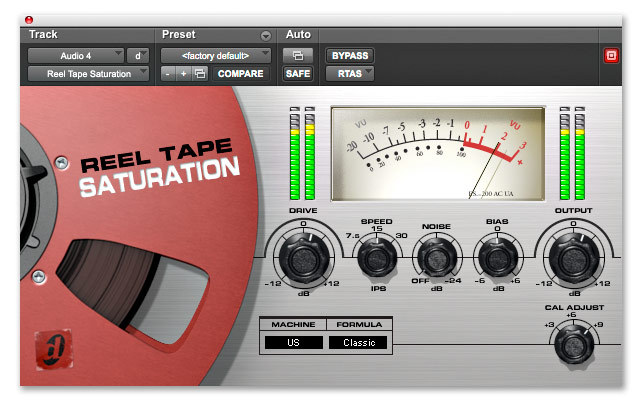 (contenu en anglais)
Afficher la traduction automatique
Afficher l'avis original
The Avid Reel Tape Saturation is a plug-in that is present in the Avid (formally Digidesign) Reel Tape Suite of three plug-ins. The bundle consists of this plug-in along with the Reel Tape Delay and the Reel Tape Flanger. I'm pretty sure that this plug-in and the others in the bundle are only compatible with Pro Tools and other Avid video sequencers, so I'd only continue reading if you're got Pro Tools or are planning to! As far as installing this plug-in and the full bundle goes (it's done all at once), the process was not noteworthy as it was easy and nothing went wrong. Learning how to use the plug-in shouldn't be too difficult for most users as it's definitely on the easier side of plug-ins. It's got a cool looking interface that consists of plug-ins for drive, speed, noise, bias, output, and calibration adjust, just like a real tape machine! It also has options for choosing the type of machine you'd like to use. I haven't seen the manual for this or any of the other plug-ins in the bundle.

I'm running the Avid Reel Tape Saturation plug-in within my home recording rig, which consists of a Mac Book Pro and Pro Tools LE 8. The computer has a 2.2 Ghz Intel Core 2 Duo processor and 4 GB of RAM, and I'm running Pro Tools LE with a Digi 002R audio interface. I can't say that I've had any issues related to performance with this plug-in, as this is a pretty powerful LE rig and can run a good amount at once. I wouldn't think that too many users would have a problem running this plug-in, but of course it all depends on your system.