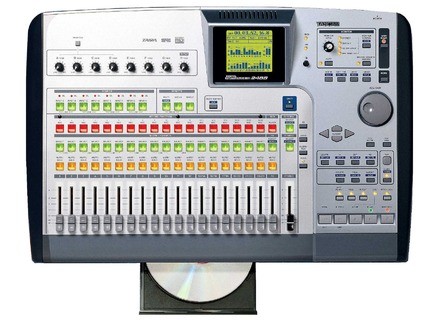 Voir les autres avis sur ce produit :
Afficher la traduction automatique
Afficher l'avis original
The Tascam Portastudio 2488 is a digital multi-track portable recording unit. It has 24 tracks, with four mic preamps and four 1/4 inch inputs. It has hard disc that you record to and also has a CD burner. While it has 24 tracks, the last couple of tracks are stereo tracks and can't be split.

The configuration and general set up of the 2488 is pretty easy, but does take a bit of getting used to, just in terms of toggling between the screens and finding your way around the menus. It is easy to use after a little practice and really has a lot of options built in. The manual is thorough and clear and is definitely worth having around while you are using this.

The sound quality of the converters and preamps are surprisingly pretty good, and so are most of the built in effects. While the preamps definitely sound a bit tinny at time and aren't the fullest, they are usable and will work fine for the project studio. It has a lot of capabilities in terms of different effects and with a few good mics you can get some pretty good sounding recordings with this if you know what you are doing. The only downfall of this unit is that it is nearly impossible to edit the audio and isn't ideal for mixing with.

The Tascam 2488 was the first recording unit I got about six years ago when I wanted to get into recording. It worked great for two years for me until I upgraded to a computer based recording system. To me, a computer based system is better than something like this because it has wider capabilities in terms of editing and mixing. This being said, this unit is well made and will do the job when recording demos or other home studio ventures. The price has fallen considerably since everyone is using computer based systems, so if you are looking for a portable recording unit like this one, this is a great deal!
Le Tascam Portastudio 2488 est un appareil photo numérique multi-piste unité d'enregistrement portable. Il dispose de 24 pistes, avec quatre préamplis micro et quatre 1 / 4 pouces entrées. Il a un disque dur que vous enregistrer et a également un graveur de CD. Alors qu'il a 24 pistes, les deux dernières pistes sont des pistes stéréo et ne peut pas être divisé.