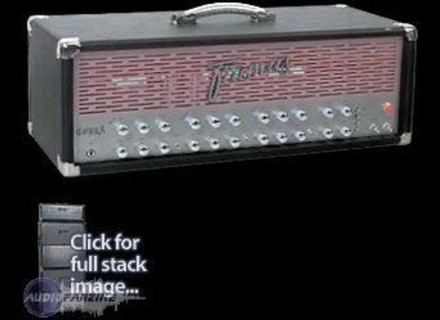 The Framus cobra can be a tricky amp to dial in for some. It is the pickiest of the amps I own concerning cabs, speakers, and pickups. I would say in my experience it prefers medium to hot passive pickups and speakers in the 30-60 watt area with a balanced frequency response. The manual does not really help in that department as it just explains how to hook the amp up. Aside from the midi it's pretty straightforward and easy to plug & play.

I mainly use the amp with my Carvin dc127 equipped with a Bare Knuckle nail bomb bridge and cold sweet neck pickup configuration. I also use an ESP Stephen Carpenter 6 string with an Anderson H3+ and ESP eclipse standard with a Seymour Duncan distortion.

I go for a slightly un-traditional metal sound. Not too much on the gain, healthy mids, and I use lots of effects. One of the main things I love about the Cobra is it's ability to handle all the noise I put into it. My other amps (5150,triamp) can get a little overwhelmed when layering loops and using lots of delay and other effects. The cobra always maintains clarity and never sounds like it's about to explode; unless I want it to sound that way. When I first bought the amp I was immediately blown away. Having gone from a POD/tube power amp setup this was quite the leap in power. The amp just plain crushes. It also has the absolute best clean channel I have ever heard on a high gain amp. That is something that is very important to me as I use the clean channel a lot more than most framus users seem to.

I've done a lot of experimenting with my guitars pickups and using an EQ pedal in front of the amp and I've gotten to a point where I have the majority of the EQ settings at noon. I keep the channel volumes around 2:30 and the master at whatever level the sound guy will let me get to. Usually also around noon.
There is a bit of a learning curve with the treble/presence controls. You can really alter the high end content by lowering one and boosting the other which really helps with getting a cutting sound without getting into buzz saw territory.

There are a few cons with the amp which I have overcome. For one the effects loop operates at some odd level that isn't exactly line or guitar level. This makes it difficult to use some gear in the loop as it can easily overload a standard stomp box. It is also a parallel loop which can cause phasing issues with time based effects such as delays. Luckily I have not had any major problems with it. I use a Boss dd20 and Eventide Time factor in the loop and it seems to be fine. I get a slight volume drop when the loop is on but it's on all the time so I just turn the master up. Also the handle sucks. It broke while I was carrying the amp on my shoulder and the amp fell about 5 ft face first onto concrete. Still works fine so I guess that's a testament to it's build quality. It is also kind of finicky with tubes. I have a 5150 with 5+ year old tubes that sounds the same as when they were installed but the framus seems to need a fresh set about once a year.

Overall this is the amp for me. I went through a period where I thought I wanted something else but trying out a few high end amps just reminded me how much I love this amp. I can get all kinds of distortion tones from classic, blues, modern metal, and even the terrible IMO death metal sound with the suck switch.

The pricing looks to have gone up considerably since I purchased mine. I guess all those killswitch albums really put the demand high. I can't say whether or not I'd pay the 3000$ they sell for new now as I'd have to really compare it to the other amps in the range like diezels. But for the near 2 grand I paid new and the 1100-1400 they go for used I don't think any other amps in the 1500-2000 price range can touch it. I've tried most of them.