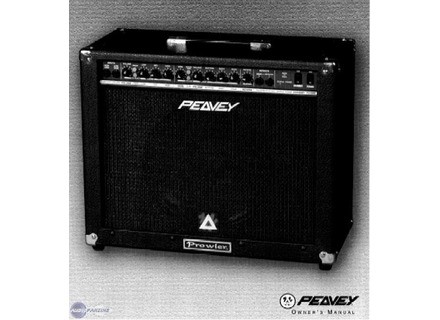 Rapport qualité/prix : Excellent
Voir les autres avis sur ce produit :
Afficher la traduction automatique
Afficher l'avis original
Peavey amplification is one of my favorite amplifier manufacture companies because they make very inexpensively priced amplifiers for the budget musician. They also make very good sounding amplifiers for hard rock metal players around. Many of the amplifiers have a nice gain and thick saturation structure that is very conducive to the hard rock and metal players. You're probably most known for their 5150 or 6505 amplifiers.


This amplifier is basically a two channel amplifier that is 45 W of power. It is loaded with 6L6 power tubes which give it a nice top and bottom roundness which fills up the frequency spectrum a lot better than perhaps a EL 34 or EL84 power tubes. You do your normal three band EQ and that's pretty much about it as far as features go. It is a fairly simple amp that doesn't really stretch out of the norm.

For this amplifier is not that great as far as many Peavey amplifiers ago. It has a decent clean channel that has a bright switch but nothing to really write home about. It can get a fender type clean tone and it sounds pretty decent at practice situations. Again the lead channel will get you a little bit of overdriving gain but it's not that great compared many other amplifiers. All around it's probably about a $50 amplifier on the used section or in classifieds. For being an all tube amp it s a pretty decent little combo for the money.