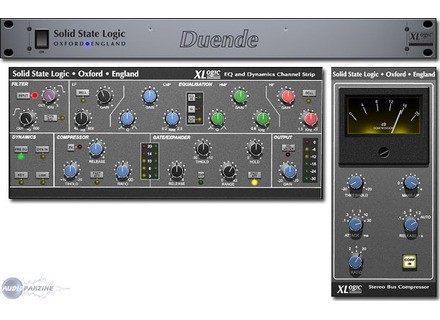 Rapport qualité/prix : Excellent
Voir les autres avis sur ce produit :
Afficher la traduction automatique
Afficher l'avis original
The SSL Duende is a DSP board based set of plug-ins that are modeled after some of the analog SSL consoles. This version contains both a channel strip that has compression, a gate, EQs, and filters while the other plug-in is a compressor. The machine I use this plug-in set with is an Apple Mac G5 and I run the plug-in with a Pro Tools HD system.

Installing the SSL Duende takes a little bit longer than most plug-ins because it has the DSP board that also needs to be installed in addition to the software. However, if you follow the instructions properly it isn't all that hard and once the DSP board is installed you never have to touch it again. I had no compatibility issues at all with my configuration and it has always run flawlessly for me. The interface of the plug-in is also pretty easy to understand even though there are a lot of different parameters and sections to them. The manual for SSL Duende is pretty necessary to have around so you can install the DSP board properly, so unless you have previous experience with it I would recommend having it around.

I usually have no problems at all running a bunch of different SSL Duende plug-ins at once, as I've never had an instance where I was running out of processing power because of them. This all has to do with the DSP board that does all the work so your computer does not have to. It also makes the sound quality of the plug-ins extremely high as these truly sound great.