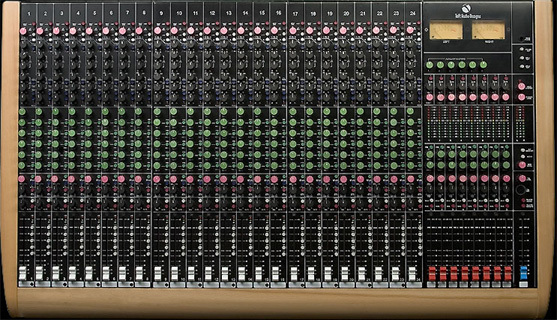 (contenu en anglais)
Afficher la traduction automatique
Afficher l'avis original
The Toft Audio Designs ATB-24 is a 24 channel analog console. It's basically a recreation of the classic Trident 80B console that is loved by so many. Malcolm Toft was the original designer of this console and started up Toft Audio sometime after. I don't know all of the technical characteristics, but it seems like it's pretty much the same console from what they say. Each channel has everything you'd expect from a console, with built in EQ, phantom power, auxiliary controls, faders - the whole nine years. I don't know what all of the connections are on this, but it's not rack mountable since it's a big console. You can find all of the specifics on the console right on their website or from any dealer.

If you understand the basic make up of an analog console, you should be able to use the Toft Audio Designs ATB-24 with just a brief introduction as to where everything is. Even if you don't have experience with using a Trident 80B series console, this is fairly easy to understand as there isn't anything out of the ordinary that I picked up. Sure, the cue section will take a little bit of learning, but that's always going to be the case with a new console. The manual is a good thing to have around if you're looking to learn everything about it, but experienced analog console users should be able to learn the basics without one.

The sound of the Toft Audio Designs ATB-24 is definitely true to the Trident 80B console. I've used both, but never side by side, but from memory they sound pretty freakin' close to me. The preamps are nice a pristine but still have a good amount of depth, while the EQ's are in depth and sound clean as well. I just started working at a new studio that has this console, and although we do use it for it's preamps, most of the time we're using it for monitoring.