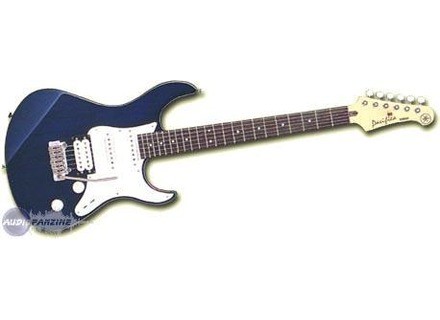 Rapport qualité/prix : Excellent
Voir les autres avis sur ce produit :
Afficher la traduction automatique
Afficher l'avis original
This guitar made by Yamaha was one of the higher end Pacifica's that they built (This one was built in Taiwan in 1997.) These are great contenders in the superstrat market... but most people mistake them as cheap guitars, so they don't get much respect. The main features are as follows:

It also had what appeared to be a typical H-S-S pickup configuration at first glance. However, the pickups were actually 4 single coils, with two of them coupled together in the bridge position to create a very unique and interesting tone. The single coils were quite glassy, very much like an older Strat. The bridge pickup was actually two single coils in one humbucker slot like I stated, so you could have both running together for an interesting take on the humbucker sound (I found it to be like an extremely thick sounding single coil without noise, but a bit beefier than a stacked "Hot Rail" pickup), or you could coil tap the bridge pickup for some great Stratty bridge pickup tones. The controls were a very simple compliment of a volume and tone control, as well as a five way selector switch.

All in all, I felt that this guitar had a really killer set of features for a great price... definitely a lot of tones to be had for not a lot of change!

The design of the Pacifica is a fairly straightforward "Superstrat" layout... kind of like a Strat that's been out in the sun too long. It was relatively light and balanced easily on the body so I dug it for playing at home as well as in a band setting. The neck was fairly fast, but not Ibanez Wizard thin... so it did have some depth to it which I feel is important. The neck had good upper fret access thanks to Yamaha's neck joint system... which is a 4 bolt system that is attached by two metal plates (one on an angle.) The end result is something similar looks wise to Ibanez's AANJ neck heel, but attaches with those two plates instead of the gromets/washers that Ibanez uses.

It's very easy to get a good tone out of this guitar. As soon as I got it home and restrung, I plugged it in and had some killer classic rock and hard rock tones going. The only real issue I had tone was with the guitar was that I found it to be either a bit too dark or a bit too bright when I got it up to band levels... there wasn't a whole lot of middle ground. I would've liked to see Yamaha use higher quality pickups which might've helped this, but it's a minor quibble, as I had other guitars that I used with my band. When I owned this guitar, I used it more for recording and studio stuff as it seemed to excel at that.

When I owned this guitar, I was using a Mesa Boogie Studio Preamp based rig with a MosValve MV962 power amp.

I found the clean sounds to be the high point of the guitar, funnily enough. They were nice and punchy... much like old Strats. When I added some reverb and delay... it was delicious. I could get classic chimey Strat tones from the fifties and sixties, or I could add some mild OD, turn the treble down and get some nice Texas blues type tones as well.

The dirty sounds were really cool, but ultimately they weren't quite what I'd expected. The tones were nice, very crystalline and clear... but only at lower volumes. I found that as soon as I brought the guitar to band practices and ran it through my main rig at band levels, it just sounded either too dark or absurdly shrill. Invariably, I wouldn't want to waste time dialing in tones when we should have been practicing, so I would end up grabbing another guitar. At home levels it was great... but the pickups really lacked something in the gain department at higher volume levels.

Again, I feel that if Yamaha had invested in some high quality pickups for this guitar (like they did with the tuners and tremolo) then it might have worked a bit better for me. Ah well. It isn't a big deal to me since I was not into it for very much and didn't need it to do the superhuman high gain thing, as I had other guitars for that. For what it was, I enjoyed the tones, just not at higher volumes.

All in all I felt that Yamaha did a very good job on this guitar, if not a bit of a 90 percent one. The features are killer, the craftsmanship was top notch, and the electronics IDEA was excellent. However, I feel that Yamaha's own pickups were just sub-par... and it led to a guitar that was only about 90 percent there. Obviously one can change pickups, but it seems like a bit of a daunting task considering the wiring and the fact that you'd have to buy two bridge single coils. The only other guitar I've seen with a configuration like this was the early Fender Jeff Beck Strat... and those versions have been out of production for years. I'm sure it's not a HARD task... but for the amount of money I paid I probably wouldn't drop $150 in pickups it anyway.

All in all I feel like these guitars, and Yamaha in general, are extremely underrated guitars and the prices that these go for are undeservedly low. Though I guess that means there are more of them floating around in pawn shops and garage sales for next to nothing for me to snap up...
Cette guitare faite par Yamaha a été l&#39;un des haut de gamme Pacifica qu&#39;ils ont construit (Celui-ci a été construit à Taiwan en 1997.) Ce sont des prétendants grande sur le marché superstrat ... mais la plupart des gens les confondent avec les guitares bon marché, alors qu&#39;ils ne reçoivent pas beaucoup de respect. Les principales caractéristiques sont les suivantes: