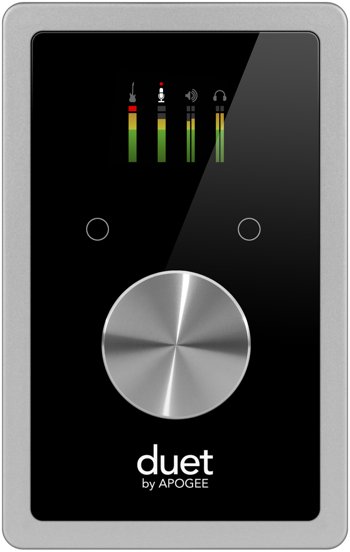 (contenu en anglais)
Afficher la traduction automatique
Afficher l'avis original
Apogee's famous audio interface, the Apogee Duet, has just recently received an overhaul, and the overhaul is fantastic. Apogee is known in the industry for fantastic analog to digital or digital to analog conversion; in fact, they are considered the best in the business. Compared to the original Duet, the Duet 2 has some changes that many owners have been jonesing for for quite some time, and for some, the improvements are only incremental and not worth it. Find out which one you are! The nice thing is that it has two more outputs than the original Duet, which makes it much more useful all in all. It still is not terribly good at dealing with outboard gear though.

The Duet 2 is just as simple to use as the original Apogee Duet. The interface is incredibly simple, as Apogee makes using the preamp headphone monitor levels very easy to access for the end user. The manual is incredibly concise, but the truth is, the device is just so simple to use that most people should not at all have a hard time getting into learning how to use the Duet 2 at all. And for beginners, I could not think of an easier interface to start on.

Everything that the Duet 2 is is fantastic. The preamps are absolutely pristine and offer an absurd amount of gain. Ribbons can be run through this thing without having to kill the knobs or the levels. What is more amazing is that these preamps are part of the interface, and that the interface's converters are so good that they appear completely seamless. The sound is completely professional, and you can get it well before you hit the 4 digit prices with the Duet 2.