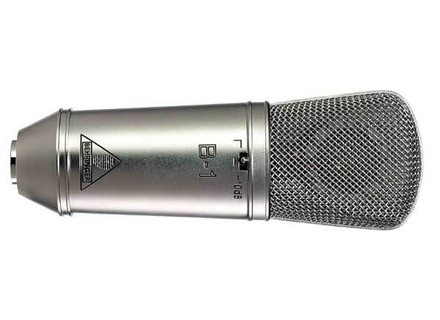 Rapport qualité/prix : Excellent
Acheter ce produit neufComparer les prix >
Voir les autres avis sur ce produit :
Afficher la traduction automatique
Afficher l'avis original
The Behringer B-1 is a very affordable large diaphragm condenser microphone that is profitably targeted at the low end home studio owner. For a budget microphone, it's not terrible when it comes to specs. It has the expected frequency response from 20-20,000 Hz and even includes at 10 dB pad and a high-pass filter. These are features that I would expect on most microphones, but Behringer seems intent on giving their customers as much as possible for as little as possible.

Therein lies the problem with the B-1. I can ramble on about subjectivity all I like, but most microphones I do not like tend to end up in a limbo for me, where I can say, "I did not like this microphone, but I can understand and appreciate its value. Maybe someone else will like it." This was not the case with the B-1.

You would expect the cheap Chinese made condensers to sound very bright and sibilant, but I would not have anticipated the absolutely narrow sound that this microphone picked up. I am not a fan of the Behringer B-1.

You get what you pay for? And considering the target market of this microphone, that may not be bad.

The Behringer B-1 comes with more than you would expect for a microphone of this price. It even includes a shockmount, a flight case, and a windscreen, so a lot of people who don't understand audio all that well will be lured in by the package. Truth be told though, there are still better deals out there than this that come with more than this, and for maybe fifty dollars more, one can now reach the entry-level microphones that actually carry some weight in their sound. And their construction; the Behringer B-1 feels just as cheap as it sounds.
Le Behringer B-1 est un microphone très abordable grandes condenseur diaphragme qui est rentable ciblée au propriétaire d'un studio à domicile fin faibles. Pour un micro budget, ce n'est pas terrible quand il s'agit de spécifications. Il a la réponse en fréquence attendue de 20-20,000 Hz et inclut même à 10 dB et un filtre passe-haut. Ce sont des caractéristiques que je m'attendrais sur la plupart des micros, mais Behringer semble vouloir donner à leurs clients autant que possible pour aussi peu que possible.