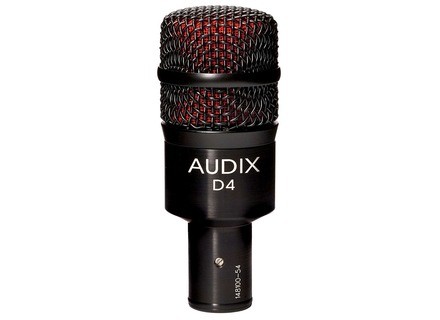 It is a rugged and excellent sounding mic much in the vein of a Sennheiser MD409. The lows are tight and full while it also demonstrates clear and accurate mids and highs.

It is fairly flat down to 38hz and has that nice rise around 2k that gives that great presence and klik to a drum strike.

All of the Audix D series are small and easily placed on a busy drum kit. Except the D6 of course.

The D4 was the original kik drum design before the D6 was released and here it shines brightly. A lot of low-end for the size.

I have been using this mic for seven years now. Both live and in the studio. It has never failed and has taken a beating . The finish is barely marred even with its use as a low-tom mic, and zero dents from stick strikes. The D-series is a very hardy mic.
In the studio I like it as a kik drum mic right in on the beater for the klik and a tight lowend response. I use it in conjunction with either another dynamic at the front head, usually an ATM25, or a condenser in a tight cardiod pattern.
It is also a surprisingly excellent sounding mic for a heavy guitar part played through a multi-speakered cabinet. Its hyper-cardioid pattern helps with phase issues in a multi-mic placement on this type of cabinet.

The entire kit of D-series I bought all those years back have been nothing but a great bargain and I would definately own them all again.
Le D4 est un Audix dynamique à bobine mobile conçu principalement pour une utilisation avec des percussions de toutes sortes, mais plus spécifiquement des tambours.