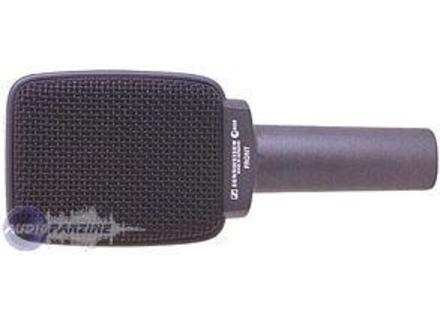 Acheter ce produit neufVoir tous les prix >
Voir les autres avis sur ce produit :
Afficher la traduction automatique
Afficher l'avis original
This mic is a very low cost, very good sounding mic, but only for very specific applications. It is a side address dynamic mic by Sennheiser which was designed to be used to record loud, mid-heavy heavy sources. Obviously the major intents are going to be guitar cabinets and horn instruments. The pickup pattern on this mic is a supercardioid, so there is some very steep rejection of the sides and back on this mic. You will get a very defined picture of your source, which is great since you often want to have a very isolated sound for your guitar and horn tracks. It has a great SPL handling capability, so you can crank your amp all the way up without breaking this mic up. It doesn't have a low-roll off or a switchable polar pattern. The output tends to be a little low, so it seems like a pad is not necessary even though this mic is meant to record loud events. You will connect this with an XLR cable and you don't need any phantom power. As for the sound, think of an SM57 but move the focus of that mic an octave lower. This mic is great for when you want guitars to sound powerful, because it really makes the mids and low mids sing. The SM57, which is usually the traditional guitar amp mainstay, can make isolated guitars sound a little hollow at times, whereas guitars through this mic are much more full.