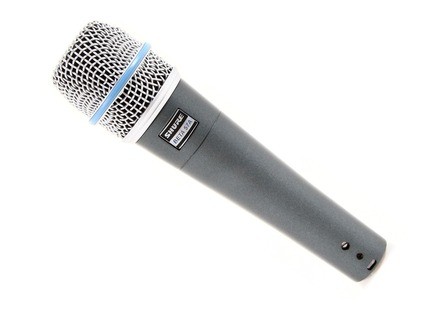 I actually bought this mic to use as a guitar cab mic initially. I was micing in a live situation with a Suhr Badger amp and a Bogner 1x12 cube cab. Nothing really fancy. It works wonderfully for that purpose. It doesn't have the awkward midrange that the sm57 and beta 58 do. But as I have owned this mic over the years I've learned that it does a lot more than speaker micing. One day I was having problems with my beta 58 picking up tons of stage noise. Tried an sm58. Didn't sound right with my voice. Tried a couple of Cad dynamic mics. Sounded good but they fed back some. Finally, given no other choices I decided to put my Beta 57 up there for kicks. Not only is it impervious to stage noise but I didn't have to eq it at all. It just naturally sounds very good on my voice. Since then I've tried it on about everything. Female singers? Great. Snare drum? Suprisingly awesome and puts an sm57 to shame. Sax? Yes it does that too.

I would go as far to say that if I had to choose one mic to have for the rest of my live show career, it would be this one. I'm serious about that. It just excels in so many applications. It never ever peaks out from high volumes and it always seems to sound very wide and open no matter what.

My only complaint is that it isn't terribly useful in the studio, outside of tracking very aggressive vocals and maybe some super loud guitar parts. But everything else about it is tops. Never had any technical issues despite really abusing a few of these.
Type de microphone dynamique
Diagramme polaire supercardioïde
50Hz016kHz Réponse en fréquence
Impédance 150 ohms
Longueur 6,23 "
Largeur 1,69 "
Profondeur 1.69 "
Poids £ 0.6.
Fabricant Numéro de pièce du BETA 57A