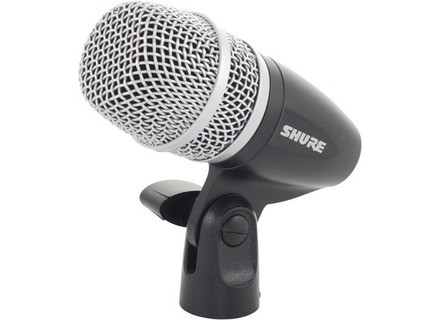 Voir les autres avis sur ce produit :
Afficher la traduction automatique
Afficher l'avis original
The Shure PG56 is an impressively small microphone designed specifically with drums in mind. It is a direct alternative to the SM57's, and often, the PG56 works better due to its small size. Once, a drummer came in and had no idea that he was being mic'ed because the PG56 microphones were so well hidden all around the drum set. Its size also betrays its image of durability. The Shure PG56 is a nastily rugged microphone, so wild drummers who still manage to hit the ridiculously small PG56 microphones on their toms are not going to blow it up like they may blow up an SM57. Don't get me wrong; the SM57 is pretty rugged. The PG56 microphones, are, simply by design, more safe from the abuses of a fast traveling stick of wood. And this thicker grill and padding make the PG56 pretty resistant to extremely high SPL levels. This is nothing I think anyone should be terribly impressed by, considering the fact that it is a dedicated drum microphone and this feature is a requirement of them.