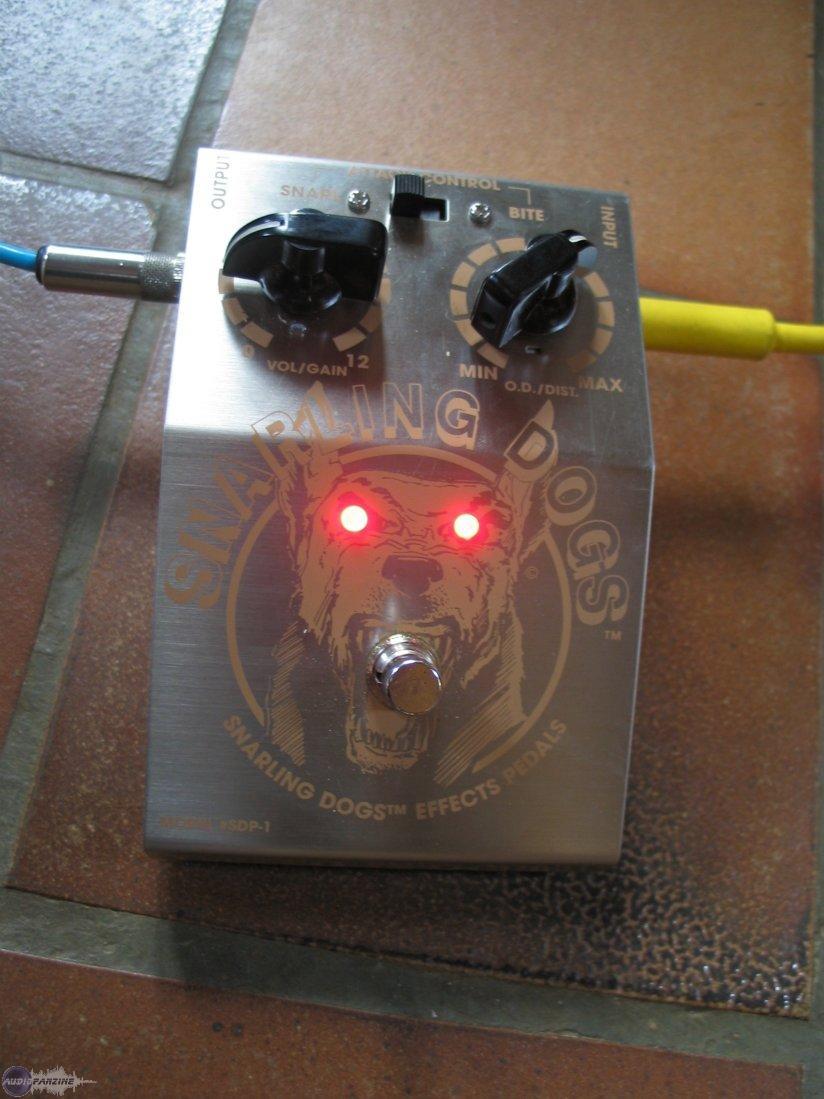 (contenu en anglais)
Afficher la traduction automatique
Afficher l'avis original
This is a tube overdrive emulator made by Snarling Dogs. I haven't used more than a few of their pedals but I'd have to say overall that I'm not always that impressed. This pedal has a few different features from most but is ultimately a digital replica of an analog sound. It can't be edited through any kind of PC or Mac and has no MIDI capabilities. It's also not rackable as it's a foot pedal. There is an option for a 9V adapter.

The editing of this pedal is pretty cool, it has a unique set of parameters for a pedal of this type. There are three knobs, one for volume, one for overdrive/distortion, and one for tone. The tone knob can be bypassed on the side of the pedal by flipping a switch. There is also an attack control, with two modes, labeled snarl and bite. The bite is a quicker attack. The manual explains this all quite clearly.

This is quite honestly not a great pedal. It's cheap, but it sounds it too, and that just doesn't cut it for me. First of all, it's supposed to be an overdrive pedal, but it doesn't sound anything like overdrive. Even on the low volume settings, it sounds like a weak distortion, not an overdrive. It doesn't sound anything like a tube overdrive either. It's way too heavy but it doesn't have a nice sound for that either. Like the distortion is better at coloring the sound than providing some actual power, it actually weakens the sound once it goes through. I don't know why I expected a digital emulator to actually be a solid recreation of a tube overdrive, but I shouldn't have.

While this is a great price, I don't think it's better than a tube screamer, which is usually only about thirty or forty bucks more than this nowadays. I don't really know if this pedal is worth it at all, it's got a pretty noisy, weak signal that doesn't really sound much like a tube overdrive at all. It'd be one thing if it had a good sound otherwise, but it doesn't really. So I'd have to give a thumbs down on this one, if you're serious about getting good tone, go with a real tube overdrive, or anything with real tube or analog technology, it'll almost always be better than this.
Ceci est un émulateur de saturation à lampe faite par chiens féroces. Je n'ai pas utilisé plus de quelques-uns de leurs pédales, mais je dois dire que je suis globalement pas toujours impressionné. Cette pédale possède quelques fonctionnalités différentes de la plupart, mais est finalement une réplique numérique d'un son analogique. Il ne peut pas être édité par n'importe quel type de PC ou Mac et n'a pas les capacités MIDI. Il n'est également pas rackable que c'est une pédale. Il ya une option pour un adaptateur 9V.