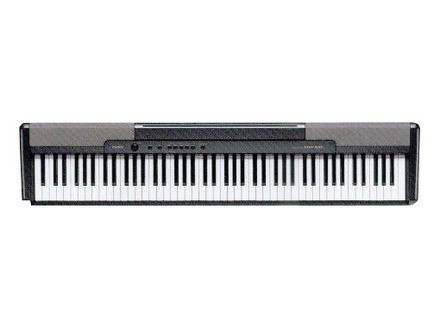 This CDP-100 digital piano is one of the cheapest full-sized, hammer-action digital pianos you can buy, and at first, I was hesitant to buy a Casio keyboard, which is well known for making lower end, non-professional digital piano products. But at the price point of around $350, it was hard to pass this up, and it really doesn't disappoint. The keys feel pretty real, compared to my baby grand piano, and the action is very natural. I've always disliked semi-weighted keys on some small midi controllers that try to emulate the feel of a real piano, but they would feel extremely fake to me. That is not the case here with the Casio. Even if you were to use the CDP-100 strictly as a midi controller, it is still cheaper than almost all other 88-key, hammer-action midi controllers as well.

The piano sounds on the CDP-100 are pretty good and realistic, and they are passable for most basic piano applications. I would not recommend the other sounds as much, such as the electric piano or strings, so do not buy this product if you intended to use those sounds. The piano sounds are stereo sampled, but they are not velocity-sampled as deep as they could be. For example, if you play the piano with low velocity, the notes do not sound real, they sound like regular piano playing, but the volume simply turned down. That would be my biggest gripe and disappointment with the sounds.