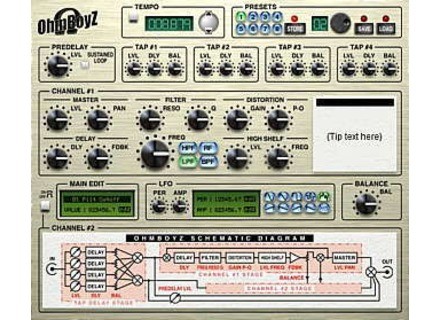 Acheter ce produit neufVoir tous les prix >
Voir les autres avis sur ce produit :
Afficher la traduction automatique
Afficher l'avis original
The Ohm Force Ohmboyz delay plug-in was easy to install and I had it up and running within my Pro Tools system minutes after purchasing and downloading it from their website. I had no compatibility issues at all, and since I installed this plug-in it hasn't given me any problems whatsoever. The interface of this plug-in is easy to follow, even though there is a lot going on. It has sections for presets, delay, master output, filter, distortion and and LFO. It is a very diverse plug-in, but since everything is laid out smartly and conveniently, it is easy to follow. I don't have a manual for the Ohm Force Ohmboyz, but you don't really need it if you don't have one.

I am currently running the Ohm Force Ohmboyz on a Mac Book Pro that has a 2.2 Ghz Intel Core 2 Duo processor and 4 GB of RAM. I run the plug-in in Pro Tools LE 7.4 that is powered by a Digi 002 R audio interface. I have never had a problem running this plug-in within this configuration, as it has always run smoothly for me. I am able to run a few of these at once, but I would recommend using this plug-in on auxiliary tracks to save CPU power because this is a pretty powerful piece of software.