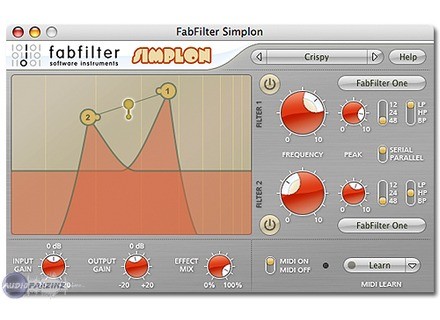 Acheter ce produit neufComparer les prix >
Voir les autres avis sur ce produit :
Afficher la traduction automatique
Afficher l'avis original
The FabFilter Simplon is a basic two band filter plug-in that is essentially a simplified version of FabFilter's Volcano 2 filter plug-in. I'm not the owner of the version of this plug-in that I've used, rather a producer who I'm an assistant to has most of the FabFilter plug-ins at his home studio and I've used them all there. He uses their plug-ins on almost everything, so it was kind of mandatory that I learn them as well, and boy I'm glad I did as they are really some great plug-ins! The Simplon in particular is really easy to use, with each of the two bands giving you control over the frequency and peak, as well as three different modes for each. Each band also gives you to option to set the db range to either 12, 24, or 48, as well as using each as either a band pass, low pass, or high pass. There are also input, output, and mix levelers included here. Since this is a somewhat unique make up, if you're new to filters and EQ's it might be a good thing to have the manual around just in case.

The only system that I've ran the FabFilter Simplon plug-in on has been a Pro Tools HD one. I don't know all of the specs on the specific system, but I think it's enough to say that it's HD and that it's enough to run almost any amount of plug-ins comfortably. I can't say how well this might run on an LE system or something similar...