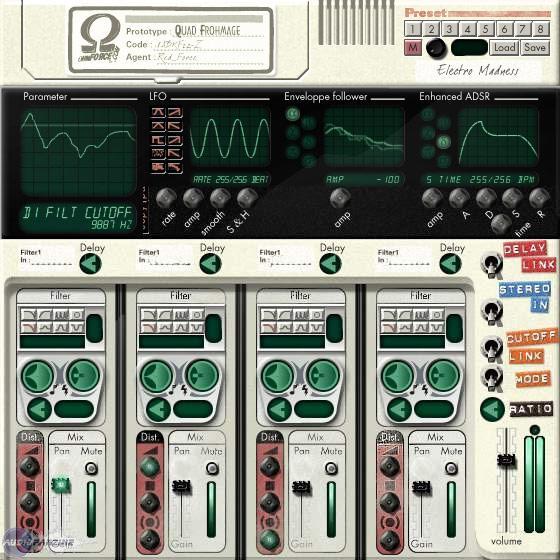 (contenu en anglais)
Afficher la traduction automatique
Afficher l'avis original
Ohm Force Quad Frohmage is a filtering plug-in that is great for both creative and more practical uses.  Installing the plug-in wasn't a problem as it only took a few minutes for me to go through the process.  The interface of the plug-in was also easy to adjusted to, although there is a good amount of information here in terms of parameters and different sections.  The typical functions are easily located as to start you've got four channels of filtering with a variety if parameters and then on top you've got sections for an LFO, envelope, and ADSR.  The plug-in also has a number of switches and other parameters that would take too long to list, but are easily adapted to as they are all simple to understand.  I haven't looked at the manual for Ohm Force Quad Frohmage so I don't know how well put together it is, although it might be worth seeking out if you are a beginner with filtering.

I'm running Ohm Force Quad Frohmage on a Mac Book Pro that has a 2.2 Ghz Intel Core 2 Duo processor and 4 GB of RAM.  I run the plug-in strictly in Pro Tools LE 7.4 that I run with a Digi 002R audio interface most of the time.  I can't say I've ever had an issue running this plug-in within my configuration as the processing power is pretty well managed.  Of course it doesn't run as well as it would if I had a Pro Tools HD system, but it really just depends on what type of system you have if this will run well or not.  I'd say that if you currently have a system that is able to run plug-ins without a problem, that this shouldn't present too many problems for you in terms of performance.