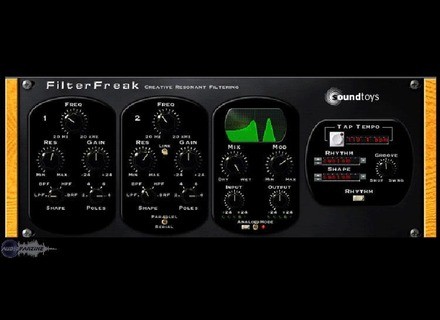 Acheter ce produit neufComparer les prix >
Afficher la traduction automatique
Afficher l'avis original
The Soundtoys Filter Freak is an EQ and resonant filter in the form of an easy to use plug-in.  The software was simple to install and it only took a matter of minutes until I had it up and running well.  I've never had any issues with the plug-in relating to compatibility or otherwise as it has run smoothly since day one.  The interface of the plug-in isn't hard to follow, although there is a decent amount of parameters and features going on that it will take a small amount of getting used to everything going on.  The plug-in has two separate filtering sections that each has parameters for frequency, gain, resonance, poles, and shape.  There is also another section that has a graph as well as more parameters for mix, modulation, input, and output.  There is then one last section that has parameters for triggering and smoothing over if you want to do so.  While there is a decent amount going on, it is all pretty self explanatory and I don't think that manual is needed because of this.

Thus far, I've never had an issues running the Soundtoys Filter Freak plug-in.  It has always run stably and smoothly within my configuration which is a Pro Tools LE system that I run on a Mac Book Pro that has a 2.2 Ghz Intel Core 2 Duo processor and 4 GB of RAM.  I run Pro Tools LE 7.4 that runs with a Digi 002R audio interface.  As long as you are able to run plug-ins that don't take up too much processing power on your computer, I don't foresee you having trouble running a few of these in a single session if you wanted to.

After using the Soundtoys Filter Freak plug-in for about half of a year, I've definitely become a fan of using this plug-in as it is a great too to get creative with using filtering beyond normal EQ.  I've been impressed with how many different types of sounds are possible with the plug-in and have also been impressed with the overall clarity of the sound quality.  The price of the Soundtoys Filter Freak plug-in is priced right as it won't cost you all that much.  This is great way to start getting creative with filtering and EQ as there is a whole world out there of new tones inside this plug-in.