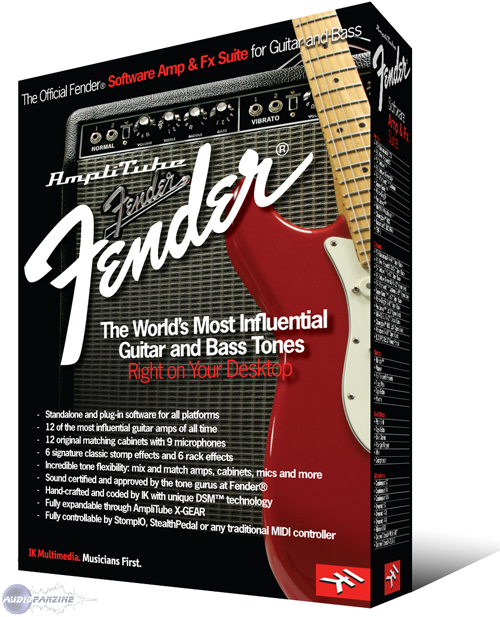 (contenu en anglais)
Afficher la traduction automatique
Afficher l'avis original
Amplitube Fender is an expansion pack for IK Multimedia Amplitube. With the introduction of Amplitube Custom Shop, individual amp models in this package can be purchased separately rather than as a bundle.
IKM Amplitube is a software plug-in that can be used inside a DAW, and can also be used as a stand-alone plug-in.

The range of Fender amplifier simulations goes beyond anything else available on the market. I love the sound of the 'small' Fender amps in this bundle (Deluxe, Pro Junior, Champ). The mid-sized amps (Twin, Deluxe Reverb, Vibro-King, Vibroverb) are the best parts of the bundle. I consider these kind of amps to be the quintessential Fender amp sound. If you want modeled versions of this kind of amp sound, this package is the way to go. Don't bother with - Guitar Rig 5, OverLoud THD, Pod Farm 2, Eleven. I consider the Fender Bassman to be in a separate class of its own. The 4x10 cabinet simulation in AT3 for the Bassman is the best compared to all the other competitors.
What surprised me the most about this software was the heavy-sounding amps. I don't really consider Fender to be known for amps with a lot of drive/distortion. I normally think Marshall, Mesa-Boogie, Bogner, etc. when I want overdrive. The Fender Super Sonic and Metal Head were surprisingly unique, and a nice change of pace compared to other types of these amps. The Metal Head is definitely extreme gain, but has a unique voicing compared Mesa-Boogie and Bogner. The Super Sonic can cover a full range of amp sounds from clean - extreme. I like this amp best for the mid-gain settings comparable to Marshall, Matchless, etc.

Fender Amps are some of the most popular and most recorded amps from the past 50 years. I'm glad Fender decided to go ahead and have an entire range of their amps modeled rather than just the Twin and 4x10 Bassman that are staples of every amp software.
It is a lot of fun to play through these amp sims because their sound is so familiar. I typically play rock music, so I usually want the sound of a Marshall or Mesa-Boogie with a little bit more gain than a Fender Twin. However, I will always have a soft-spot for the Fender clean amp sound because my uncle gave me a '72 Silverface Bassman 100 when I first start playing guitar. With amp sim software, it is so cheap to get so many different amp sounds. To me, these Fender amp sounds are essential to any producers/engineers collection.
Amplitube Fender est un pack d'extension pour IK Multimedia Amplitube. Avec l'introduction de Amplitube Custom Shop, modèles d'amplis individuels dans ce forfait peut être acheté séparément plutôt que comme un ensemble.
IKM Amplitube est un plug-in qui peut être utilisé à l'intérieur d'un DAW, et peut également être utilisé comme un stand-alone plug-in.