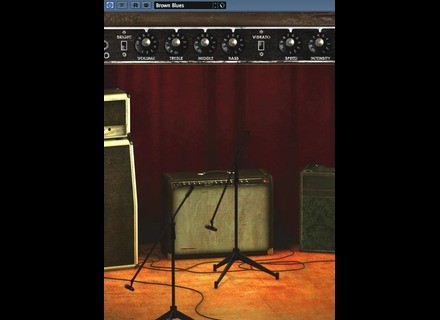 Voir les autres avis sur ce produit :
Afficher la traduction automatique
Afficher l'avis original
The Softube Vintage Amp Room plug-in is a piece of guitar amp modeling software. The plug-in is compatible across the board as far as I can tell, as you can get it for both Mac and PC and in RTAS/TDM, AU, and VST formats. I wasn't involved with the installation of this plug-in since I don't currently own it and have just used it at the studio that I work at. I can speak about the interface however, as you've essentially got three different types of amps to choose from here. Each has their own panel of controls, and their own microphone which you can move to set how close or far you'd like to be from the amp. While it doesn't say so in the plug-in, the amps modeled in here are a Fender, Vox, and Marshall as far as I can tell. I love how you can move the microphone around the amp, as you can even set it on it's axis if you'd like. It's a pretty simple plug-in to use, so a manual shouldn't be needed.

The studio that I work at has the Softube Vintage Amp Room plug-in running on a few different systems since we've got a number of different studios on site. The main system in our A room is a Mac Pro computer with dual 2.66 Intel Xeon processors and 10 GB of RAM, and all of the systems are running Pro Tools HD. We never really have issues running plug-ins on any of these systems since they are indeed HD based, so it's hard to say how well this will run on another system.