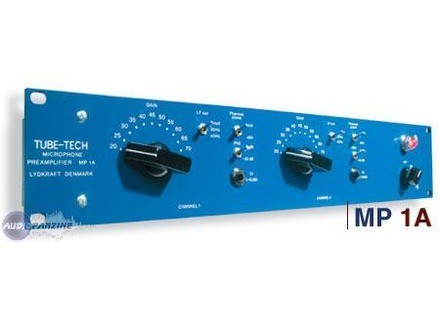 Voir les autres avis sur ce produit :
Afficher la traduction automatique
Afficher l'avis original
The Tube-Tech MP 1A is a two channel tube microphone preamplifier for use in recording studios. Tube-Tech is primarily known for making world class tube compressors, but they also have this set of preamps and EQ's amongst other gear. I hadn't used the MP 1A until a few weeks ago when I went to a new studio that had it. As far as technical characteristics, the MP 1A has two XLR inputs and outputs and a standard power cord jack as well. It also has 1/4" inputs in the front for using it as DI. It is rack mountable and will take up two spaces in a traditional casing system.

Using the Tube-Tech MP 1A isn't difficult at all, as it's a pretty straight forward set of preamps. Each of the preamps has a gain control knob that goes in increments of 5 db, in addition to a -20 db pad, built in phantom power, and a low cut filter which can be switched to either 20 or 40 Hz. That's all there is to the MP 1A, so I think if you understand the basic make up of preamps, you'll get this one fairly quickly.

The sound of the Tube-Tech MP 1A is nothing short of outstanding! These are stellar sounding tube mic preamps with a super warm and rich sound that is also detailed and true to the original source. I've used this with a few different microphones, including a Neumann FET 47 and a Sennheiser 421, and both sounded great although pretty different. They are suitable for recording any instrument, and especially sound cool on voice. These are definitely some of the best sound tube mic pres that I've heard.