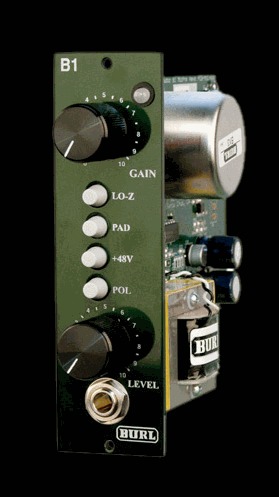 (contenu en anglais)
Afficher la traduction automatique
Afficher l'avis original
The Burl Audio B-1 is a 500 series microphone preamplifier. It's only available in a 500 series lunchbox style casing, so it doesn't have any connections or power supply of it's own, as you'll get that within the lunchbox casing that you'll need to put this in. It does however, have a 1/4" input in the front of it. It's an analog piece of gear of course, and is again, only rackable in a 500 series rack.

The make up of the Burl B-1 isn't tough to follow at all, as it's pretty standard for a mic pre. It's actually got two different knobs for setting your level - one for gain and one for level. This gives you further control over the amount of clean or gained signal that you're getting. It also has buttons for phantom power, a pad, polarity, and for lo-z, which engages the DI input in the front. I've never had a need to check out the manual for the B-1.

The sound of the Burl B-1 is very impressive. It's a versatile microphone preamp, as between the two different levelers you can fine tune your sound a bit. It presents a nice and full picture of the sound, and is great for use across the board in terms of applications. I've personally used it for recording electric guitars, and it sounded as good as it could have considering the other gear being used. I really like having control over both the level and the gain, as it reminds me of using a console when using the line input and the fader. You're definitely going to be getting a nice and big sound with the Burl B-1.

If you have a 500 series rack or are thinking about putting one together, the Burl B-1 is something that you should be aware of. It's about the same price as the popular API modules, but offers up a different color and a slightly different make up when compared to most of the standards out there. While I don't own one of these myself right now, it's definitely a piece of gear I'm considering add to my lunchbox.
Le Burl Audio B-1 est un préamplificateur micro série 500. Il est seulement disponible pour les lunchbox de serie 500 et ne possède donc pas sa propre alimentation.Il possède cependant une entrée 1/4" sur la face avant.C'est bien sur de l'analogique, une fois uniquement rackable avec un rack pour série 500 .