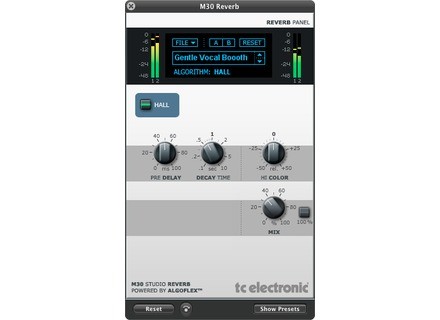 Voir les autres avis sur ce produit :
Afficher la traduction automatique
Afficher l'avis original
The TC Electronic M30 Reverb is a software plug-in that is compatibility with a variety of interfaces and systems.  I didn't have a problem at all installing the plug-in as I went through the simple prompts that always come up when you are installing a plug-in.  It was also easy to download from the website, as I got this plug-in as a free download during a 72 hour period (which is still going on as of today) that TC Electronic offered up this plug-in for free.  I had the plug-in downloaded and up and running within a few minutes.  The interface of the software is also simple enough to follow as there isn't anything complicated going on here.  The plug simply has knobs for pre delay, decay time, hi color, mix, and a mode section.  Everything is straight forward and easy to understand, so although I haven't seen the manual for this plug-in, I don't think one is necessary as everything is self explanatory.

I am currently running the TC Electronic M30 Reverb on a Mac Book Pro that has a 2.2 Ghz Intel Core 2 Duo processor and 4 GB of RAM.  I run the plug-in in Pro Tools LE 7.4 that runs with a Digi 002R audio interface.  Thus far I haven't had an issue with the plug-in, although I haven't been using it for very long.  I have run it only on a auxiliary channel and sent buses to it, as this is what I always do with reverbs and delays to save processing space.  While I've only downloaded and been using the plug-in for the last day or so, I haven't encountered any problems with it related to performance.

In the short time that I've been using the TC Electronic M30 Reverb plug-in I've been pretty impressed with it.  While I probably wouldn't have bought the plug-in, since I got it for free I have been able to try it out in my configuration.  I've been impressed with gear made by TC Electronic and this is no exception.  The plug-in offers up a very realistic sounding reverb in a variety of forms.  Even if you don't get this free plug-in in time before the free download expires, this is a cheap enough plug-in that it would be worth a trial to see if it something that you might want to be, as it really has a great tone.  I'd definitely recommend this plug-in for any home studio owner looking for a good sounding reverb on the cheap, or anyone in the next few days of this review as you can get it free!