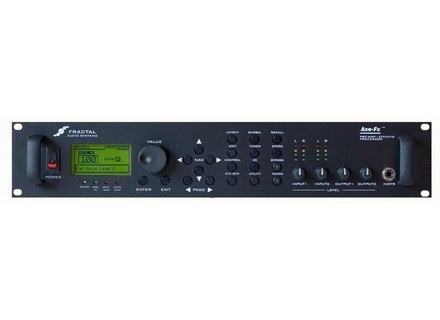 The screen editor is laid out in a 4x12 grid scheme. So for guys that want more than 12 series efx in a row they can insert a send block on say row 1 and insert a return block on row 2 and pretty much can add serial efx until they run out of processing power. 4 efx can be run in parallel.

You get a efx loop block as well where the second set of i/o in the back become an efx loop. This way you can interface with other gear.

Editing is easy enough, when usaing their Axe-Edit PC/Mac editor things get a lot easier.

Manual is great, their forum will be of even better help when you hit any road blocks.

Easily put if you can know how certain sounds are achived they can be dialed in with it.
One of the greatest features of it is that you don't have to use it as an amp sim, although I'm a big fan of their amp models. You can for example send the efx loop out to your amps and load it down with a THD Hot Plate and send the line-out back to the effects return to the Axe-Fx. Then attach a contoller to a mixer block with a expression pedal and you can use the pedal to pan between your loaded down head and one or two amp models to varying degrees. Or just make it switchable. But the blending is amazing when you want gain with a clean attack, or some harmonic haze behind your cleans.
For that matter you can set your modifiers that on an expression pedal toe up you have say model 1 with delay, verb and chorus, on toe midway amp 2 with verb and moderate gain, toe down model 2 with delay, verb, chorus and more gain.
You can have a noise gate that sense the input and gates after the amp, or the delay for that matter, think ISP Decimator
The limitations are pretty much what you can think up.