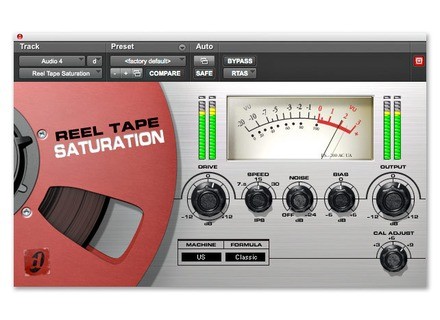 Voir les autres avis sur ce produit :
Afficher la traduction automatique
Afficher l'avis original
This is a Digidesign made plugin. It's the Avid Reel Tape Saturation plug-in. It comes with the ReelTape suite which also features the Reel Tape Delay and Flanger. It's a pretty easy plug-in to install and get started. I didn't feel as though I really needed to use the manual, as I've basically just been testing out the different features to get a feel for it. The manual is informative enough though. The basic idea behind the plug-in is that it's supposed to replicate the sound of a tape machine on your digital tracks. There have been many attempts to get this pattern right, and they've all had different results as far as I've seen. This is probably one of the better attempts at nailing this sound that I've come across. It has controls for drive, speed, noise, bias, output, and calibration adjust. These all give it characteristics of tape machines, but actually also allow the flexibility of getting a variety of tones as opposed to the specific sound of one tape machine.

I haven't had any issues with this plug-in at all. It's never crashed Pro Tools on me (unlike some other plug-ins i've used). It's never really bogged down the system for me either. It's been a quick, satisfying performance the whole time. I use it with my Pro Tools LE 8 home system with a Digi 003 and have yet to experience any issues, and there have been times when my system has had a hard time keeping up with a plug-in.