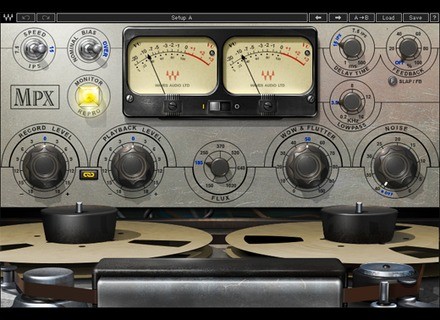 Voir les autres avis sur ce produit :
Afficher la traduction automatique
Afficher l'avis original
This is yet another Eddie Kramer product that Waves has released. This time, they made a plugin based off of the famous Ampex 350/351. For those that don't know, this was a very famous master tape device that was used for some saturation and other cool effects on the master bus and even individual tracks at times. The device is a bit complex, so I'll break down what everything does:

Speed - this selects the tape speed that you want
Monitor - there are various monitoring modes you can select with this
Bias - adjusts the overall bias of the sound. This is mostly used for fine tuning everything.
VU Meter - simply displays the meter
VU Calibration - this sets the overall limit of what you're going for
Delay Time - this is probably the coolest feature as you can add some real neat delays to enhance the quality of the mix or add a totally unique sound
Delay Tape - this simply selects different modes for the delay
Feedback - this controls the amount of the delay signal
Lowpass - just as it says, it's a lowpass filter
Record level - this is simply the input level
Link I/O - links the record and playback levels
Playback level - controls the total output
Flux - this emulates some of those more bizarre sounds that would occur with the real units
Wow & Flutter - controls different modulations
Noise - you can actually add noise with this for that more vintage feel