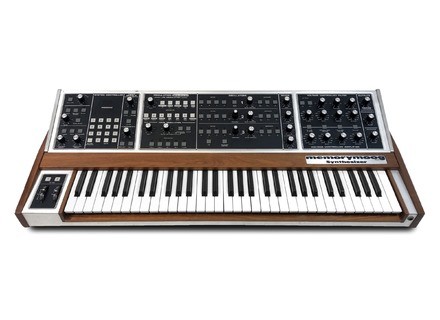 Voir les autres avis sur ce produit :
Afficher la traduction automatique
Afficher l'avis original
This was made in the early 80’s and had a really commercial sound and everyone was using them. I think everyone would still use them today if they actually had one to hear how great it really sounds. The on board sequencer was actually surprising once I used this. I didn’t expect a On board Moog sequencer to be so easy to use, especially since some of the other moogs gave me so many problems with sequencing in the past. So the Memory Moog really surprised me. I was also surprised on how well built the whole model is, it seemed to have better built knobs and sliders than previous models (pre 1980) . It think they may have used different materials with this moog that made it more well built. I do love the wood grain accents above the keys and around the base of the whole unit. It just adds that classic vibe to it and I love having it around now .

Its not exactly easy to use, but you wont have too many issues using it. When I comes to a moog most people get them just for the sound so they don’t care how anything else works. that’s kind of why I got it was just for that classic moog sound, at first I didn’t even know that it had a sequencer until started to do some research on it before I invested. I still have this sitting in my personal home studio on a keyboard stand. I do have some issues with a few of the keys, but they where like that when I purchased it just from taking a pounding by the previous musicians. It probably had a lot of owners before me.

The sounds are great , and its easy to get the sound that you want.

I love all moogs and the Memory Moog really surprised me, its most definitely a keeper and I wont let mine go for anything.