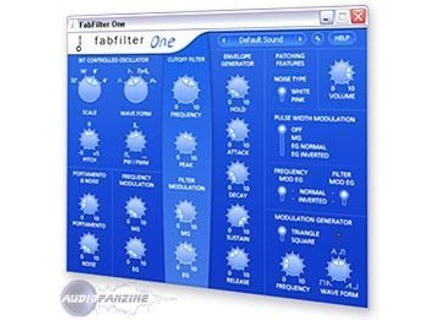 Acheter ce produit neufComparer les prix >
Voir les autres avis sur ce produit :
Afficher la traduction automatique
Afficher l'avis original
So far I have had no compatibility issues but I did have one problem. When I first started it up, I had to locate the presets folder. Once found, it worked fine. The manual is clear enough. There isn't much to this synth as it is pretty simple so there wasn't much to read up on. Yes, the configuration is a simple as it gets. You get a set of knobs (4x4) and a few other options. Very easy to figure out. All the typical functions are very easily accessible.

So far the FabFilter One works great in both Logic 9 and Ableton 8. I have not had any issues with crashes or lost presets. I had an issue setting up one of the midi cc buttons but it turned out to be my own stupidity. Just to let everyone know, the sustain pedal on your keyboard won't hold the notes out by default. You have to set it manually via the "Midi Learn" feature and set it to the "Hold" knob. I have been using this synth for only a few weeks.

What I like most about this synth is its overall simplicity. It is very easily navigated and by starting with the presets, you can really get some great sounds out of this thing. I personally like the pads and the drum synth sounds. The only thing I don't like about this synth is that the sustain pedal isn't setup by default to hold notes. Other than that, no other problems. My studio partner bought this one a few years ago but he didn't remember how much. The sound quality is really good. Its very warm and realistic. I have used many plugin synths and this one is a pretty good contender. I don't use it much for recording as much as I do live. It very easy to use so its ideal for quick editing during live situations. Yes, I would definitely buy this one if my studio partner hadn't already.
Jusqu'ici, je n'ai eu aucun problème de compatibilité mais j'ai eu un problème. Quand je l'ai démarré, je n'avais pour localiser le dossier Presets. Une fois trouvé, il a bien fonctionné. Le manuel est assez clair. Il n'ya pas beaucoup à ce synthé car il est assez simple il n'y avait donc pas grand chose à lire sur. Oui, la configuration est un simple que cela. Vous obtenez un ensemble de boutons (4x4) et quelques autres options. Très facile à comprendre. Toutes les fonctions classiques sont très facilement accessibles.