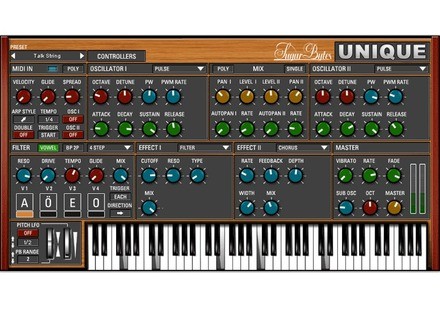 Acheter ce produit neufComparer les prix >
Voir les autres avis sur ce produit :
Afficher la traduction automatique
Afficher l'avis original
Sugar Bytes Unique was a vst synth that I purchased over a year ago for around 200 to 250 dollars. At first I though that was too much to pay because they didn’t have a demo online to download available and I was worried about paying that amount of money and not feeling satisfied with what I purchased. The only reason that I purchased it is because they had a demo video online just showing some of the features and sounds that it offers. After I watched the video once I knew for a fact that I would end up getting it. It did take me some time to fish out the 250 though, I didn’t purchase it right away.

Using this at first cause some problems on my 64 bit computer, it actually caused a lot of problems. I emailed them about the problems several times and they kept saying they would release an update, so finally they did and it worked great after that. I had to use it on my windows XP system in order to use it without it crashing on me.

Sugar bytes Unique does have a Unique sound and with all of the effects that you can get and the ability to control the sounds with the basic XY field like some of the other synths used to have makes everything better. They have took some old techniques that you use to be on older VST’s and reinvented it to keep it current. But there is no doubt, that my favorite thing about Unique are the sounds. The sounds are amazing and they are some of the best that I have heard in a vst in a long time. You can build your own sound and be very different with Unique. You will have to have at least 256 MB of ram in order to use it though. It does use a lot of CPU. But you can use it on almost any system now that they have updated it. Or you can use it stand alone.