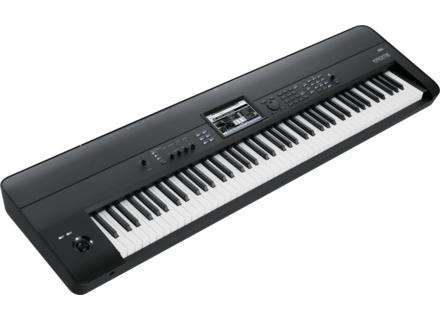 Voir les autres avis sur ce produit :
Afficher la traduction automatique
Afficher l'avis original
We just got the Korg Krome-88 in our studio last week, it has weighted keys and 600+ sounds. There are even 900 arpeggiator patters on it and 600 drum grooves. At first I really didn’t want to invest our studio’s money on another Korg board because a lot of the recent ones that we have got from them have been very similar in sound. I wanted to spend our budget elsewhere and get something different but after I saw the price of the Krome-88 I figured it would be worth a shot because it was very affordable. You can purchase the 61 key version, 72 key version or this 88 key version for all affordable rates. Of course the 61 and 72 key Krome are a little cheaper than the 88 key version.

Setting up was simple, as soon as it arrived we took it out and plugged it in and started to mess with it. There was nothing too it, it did come with a manual but have not even looked at it yet or even took it out of the plastic because if you have used a Korg keyboard before then you have used them all. Korg continues to keep most of their set ups the same from keyboard to keyboard.

You can use the Krome-88 like a plug in on your computer. We are still in the testing phase of using it with a few different DAW’s to see which one we like it with the best. Most of the sounds from the Krome-88 come from the Kronos keyboard which I have used before but no longer own.