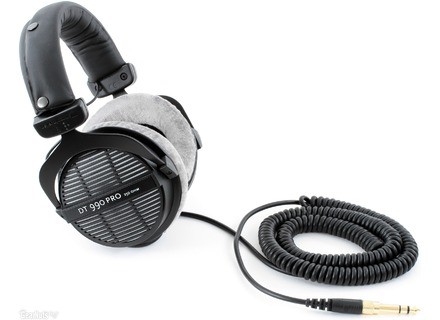 Acheter ce produit neufVoir tous les prix >
Voir les autres avis sur ce produit :
Afficher la traduction automatique
Afficher l'avis original
The Beyer Dynamic DT 990 Pro’s are super comfortable, and the fold-up design is awesome. I've owned my pair for at least 7 years (ish) and they're just about all I've used. They're very durable and they sound REALLY good. And in fact, that is probably my only issue with the 7506. They sound too good. Pretty much every mix I've ever done with them sounds unbelievably awesome in the headset, but when the final mix is played on another system, there is much to adjust. I guess you just have to learn to compensate, but it seems like a lot of compensation especially on the lows and clarity of it all (as in the headset sounds much fuller, clearer and punchier than the mix really is). I have a set of expensive Beyer Dynamics I've owned for a long time, but never used them because they don't pump out the volume levels that the 7506 does and they don't initially sound as good. I'm going to try to make the switch to mixing with the Beyer set and see how it differs. All that to say, I still think the 7506 is a great set especially for any musicians that would be using them in the studio or on the stage (like drummers). I'm just not positive it's the best set for accurate mix representation.

They translate well, are constructed better and more comfortable than the 7506s. They are in my opinion, the best bang for the buck right now. Comfortable, rugged and most importantly, represent the mix closest to what my monitors are telling me with added detail. Prior to using the ATH-M50s the low end on my mixes was always somewhat off. In the last year that I have used these phones, my mixes have improved dramatically, specifically in the low end where the issues were. Yes, they are a $50 more but well worth it.