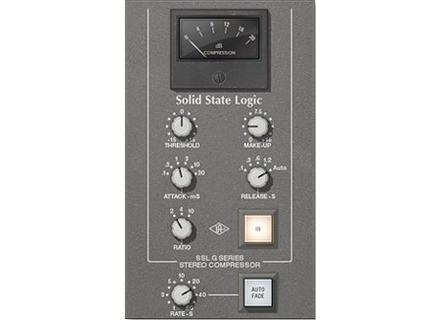 The SSL G Series Bus Compressor plug-in for UAD-2 is an incredibly faithful circuit emulation of the legendary SSL 4000 G console’s bus compressor. The undeniable drive and punch of this G Series master compressor — modeled to exacting detail by Universal Audio and fully authenticated by Solid State Logic® — helped make the original 4000 G Series the world's most success- ful studio production console. Engineers have come to rely on this master com- pressor to “glue together” mixes like nothing else, as well as patching into it for wonderful results on drums, pianos and more.
With simple, intuitive controls and transparent compression characteristics, the G Series Bus Compressor plug-in for UAD-2 captures the iconic SSL sound with stunning accuracy. Plug-in controls comprise fixed Compression Ratios (2:1, 4:1 and 10:1), and Attack and Release controls with program-depen- dent Auto Release function. Continuous Threshold Control and Make-Up Gain, compressor bypass, and the original Auto Fade (1-60 seconds) feature provide full operational authenticity.
The SSL G Bus compressor has been used to put the final touch of cohesive- ness or “glue” to more mixes than any other compressor in history! Its true use- fulness and beauty is usually in its subtle ability to make your mix “pop” just a little more, with a subtle increase in energy and excitement.
Traditionally, the SSL G is most commonly used from the beginning of the mix process, and the engineer is “mixing to” the sound and behavior of the com- pressor. The ideal way to audition this plugin is on a new mix, dropped into an insert on your stereo master fader. In this case, you will be spending a lot of time keeping an eye on gain reduction metering and you may make tweaks to the setup as the mix progresses. Of course it can also be dropped in exist- ing mixes at any time, but keep in mind it may take a bit more effort to dial in, especially if your ear is already used to the sound without its compression properties.
The SSL G is also useful of groups, such as drum busses. in this case, a more aggressive approach may be appropriate, with a greater range of gain re- duction. 10:1 will give a harder sound often desired for drum groups. Fast at- tacks releases will give the most audible sound of the compressor working.
Finally Auto Fade is useful when the end of a song needs a gradual decrease in volume. The speed of the fade can be tuned from 1 to 60 seconds, and in- corporates SSL's unique fade curves. fade in is also available.