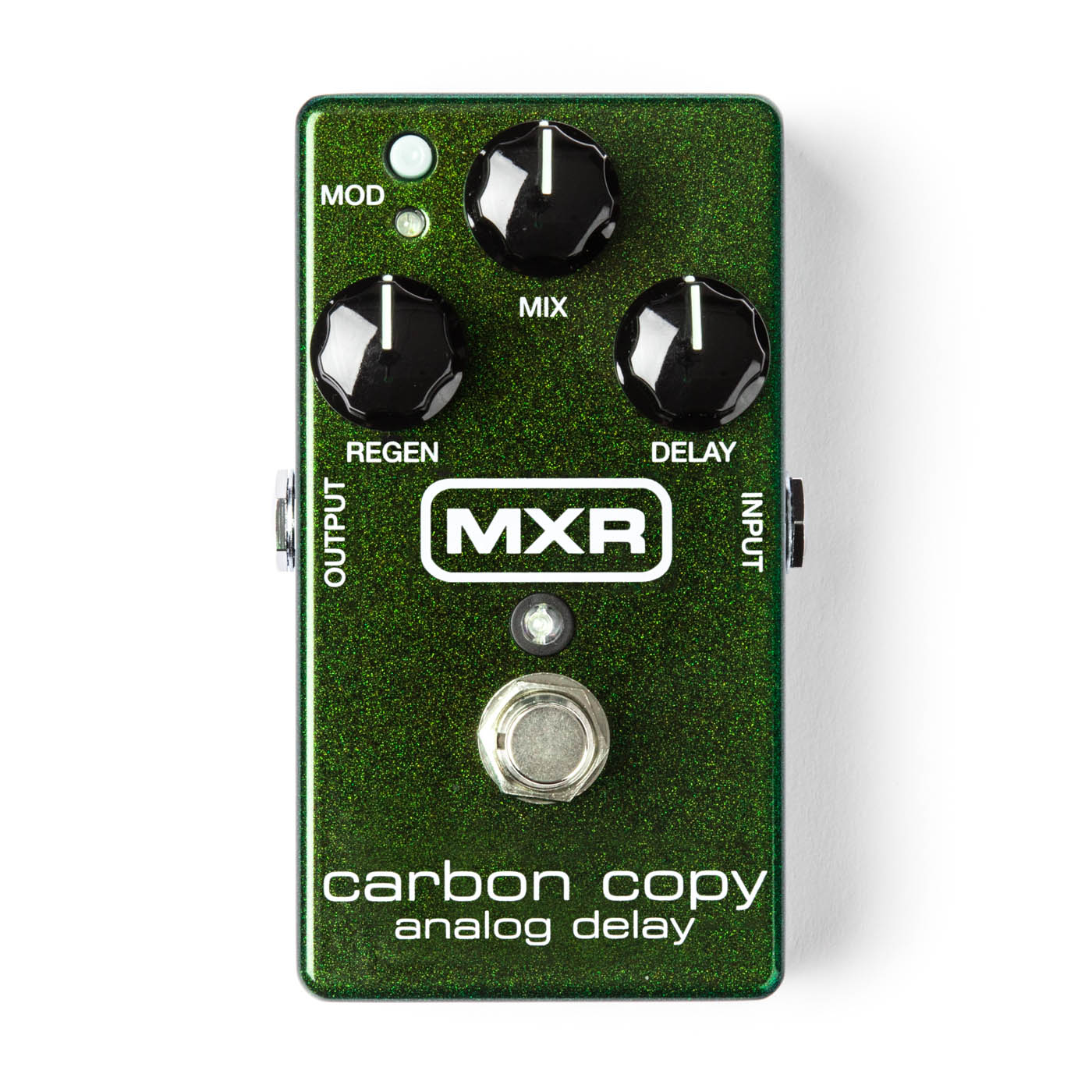 (contenu en anglais)
Afficher la traduction automatique
Afficher l'avis original
The MXR Carbon Copy analog delay is designed to be a pedal that can capture many of the vintage analog and echo type tones used by players from the sixties onward. It's a very simple pedal, with only three controls as well as a modulation switch. There is a control for the effect level, the length of the delay repeats and the amount of times that you hear the repeats. Hitting the modulation switch adds a bit of swirling, chorusing sound that harks back to the old tape Echoplex units with their modulating heads. It's finished in a really cool dark sparkle paint and has a plug for a DC adapter as well as a spot for a 9V battery. It doesn't have a lot of the other features of similar BOSS or TC Electronics units (IE: tap tempo) but it makes up for that with a pure and awesome analog bucket brigade delay tone.

Setting up this pedal for use is extremely simple. As stated it only has three controls onboard. Mix controls how loud the effect is, Regen controls the time of the repeats, and Depth controls how many repeats you are hearing. The pedal goes from slapback type country delays to longer David Gilmour esque lead delays simply by turning the Regen knob clockwise to get a longer delay time. It's really quite versatile in that regard - you don't have to do too much as far as changing the pedal settings to get a wide variety of good and diverse tones.

I've used the MXR Carbon Copy with various Mesa Boogie, Splawn, Orange and Peavey amps. I definitely preferred it in the effects loop of an amp as it sounds much clearer and crisper, especially with gain added. The tone of the pedal really doesn't cut into the natural sound of the amp being used, which is a great thing. The pedal works great for slightly trippy sixties style clean tones in conjunction with the modulation button. I found myself really loving that and the slapback type settings for when I wanted to use the pedal on clean settings. When it came to using the pedal with overdrive I definitely preferred using it as an enhancer for leads - using the longer Gilmour type delay times to really make the sound very smooth and liquid-y. Though it was definitely not quite as easy to balance the delay for clean and lead tones, once I figured it out I was contented to use the same settings for well over a year.