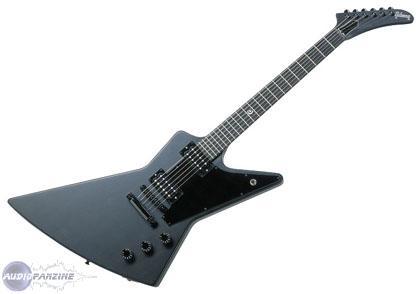 (contenu en anglais)
Afficher la traduction automatique
Afficher l'avis original
The Gibson Goth Explorer was designed by Gibson about 15 years ago as a more "gothic" looking guitar to appeal to the metal crowd of the late nineties and early part of the 2000s. It features all the standard specs of an Explorer guitar but in a satin flat black finish and with black hardware, an ebony fretboard with only one inlay at the twelfth fret and a pair of uber hot Gibson 496R and 500T humbuckers. They were built in the USA plant along with the other Gibson guitars and the standard specs of mahogany body and neck, 22 frets, tune-o-matic bridge with stopbar tailpiece and the typical Explorer control layout are just like the famed '76 reissue.

The Explorer isn't the most ergonomic guitar on the planet in general due to the fact that its shape is a bit on the large and somewhat ungainly side and can be difficult for smaller players to deal with. Considering that the Goth model is the same as a '76 reissue shape wise, it's really no different in the ergonomics department. It retains a very similar medium range weight too. The upper fret access is decent on these guitars, but not nearly as good as some other Gibsons like the Flying V or SG.

Getting a good sound out of this guitar is decent if you're a hard rock or metal player. Due to the higher output pickups and general nature they have in conjunction with the mahogany body, I found that the best tones out of this particular guitar were through a high gain amplifier playing heavier rock and metal rhythms and some leads. The Goth doesn't quite have the definition and dynamics that I would like for clean and lower gain tones as much though they're not terrible by any means.

The Gibson Goth Explorer is a guitar that I figured would sound best for hard rock or metal stylings based on its looks and I certainly wasn't led down the wrong path. Though in all honesty the guitar isn't THAT dissimilar to a '76 reissue, I still find that cleaner and lower gain tones are not the strong suite of this guitar. The hotter Gibson pickups combined with the all mahogany construction and ebony fretboard give a brighter and more metallic sound than the regular model that is apt for tighter tones with high gain rigs. The neck pickup has great sustain that works well for lead work in the shred vein, and the bridge pickup is great for chugging rhythms as well as more staccato based lead work with lots of screaming harmonics and overtones.