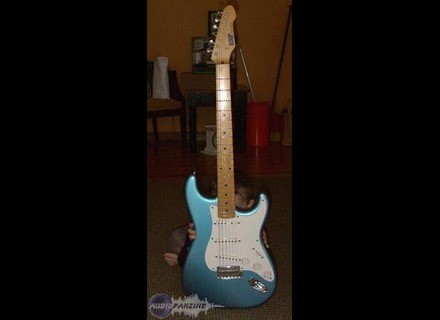 this one's in a sunburst finish. It's pretty much an exact strat, just made by another company other than Fender.

Like a strat, it's very ergonomic with the body contours. Minus the bolt on neck with a huge hump, if you can get over that then upper fret access isn't too difficult however for most players it's a bit of a burden. Though everybody that has played strats is probably used to it.

The neck is also very nice. I'd say it's quite similar to any standard AM strat from fender. C compound radius-type. Comfortable to play.

The trem is decent as well though I don't use it often, I would recommend using it for just slight vibrato, nothing crazy.

The sounds are quite decent. Most ESP strat owners I've found don't really change the pickups, they keep it old school and stick with what came in the guitar. No, they're not noiseless but neither are fender AM strats on certain models. But they sound quite good on clean. You get the typical twangy and glassy cleans with the 2 and 4 positions.

Again they're not noiseless so you do have to compensate if you were to kick your amp into overdrive. Everything is old school with this guitar, you have to settle with the noise and play through it or work with it somehow.

But this is 2012. Noiseless pickups have come a long way and I am a big user of noiseless single coils so I do believe that one doesn't have to compromise anymore with the 60hz hum and can be satisfied with noiseless pickups that sound just as great as regular single coils. Thus the rating.

Great guitar. A perfect strat for half the price of an American Fender. I would definitely go for one of these over an american fender anyday. The build quality is on par, the pickups are too. The hardware is also decent though I don't use the trem a lot myself and if I were I would just use it for slight vibrato to avoid detuning the guitar. It doesn't have locking tuners so you can't do crazy on it. It's your typical traditional strat at half the price. Not much to complain about!
C'est un 80, je crois, stratégie par l'ESP made in Japan.