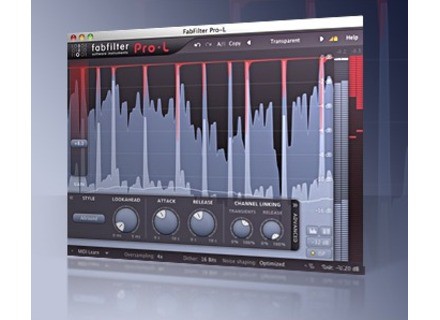 Voir les autres avis sur ce produit :
Afficher la traduction automatique
Afficher l'avis original
The FabFilter Pro-L is a high quality limiter plug-in that is available for DAW’s across the board. I didn’t really know too much about Fab Filter until someone I work with hipped me to them and I’ve been using them within his set up ever since (I’m an assistant for him). While I’ve mostly used the filter plug-ins that they’ve got to offer, the Pro-L is as good at what it does as any. Since I don’t own it I wasn’t involved at all with installing it so I won’t really be able to speak about this process. As far as learning how to use the plug-in goes, I didn’t find that this one had too much of a learning curve. It’s not as simple as something like the FabFilter Micro filter (a simple one band EQ), but it’s still not very hard to use. It gives you parameters for choosing the style/mode, lookahead, attack, release, and further options for channel linking, oversampling, dither, and noise shaping. It also has a graph that shows you everything in the background, which is always a good thing. I haven’t checked out the manual for this plug-in, but if you’re a less experienced user it might be a good idea to have it around simply to explain the parameters.

I’ve only used the FabFilter Pro-L plug-in at the home studio of the producer who I work for. I’ve messed around with most of the plug-ins that FabFilter has to offer on this system, and the Pro-L is definitely one of my favorites, which I think is saying a lot because they really have some cool plug-ins to work with. The system that he is running the plug-in is Pro Tools HD 8 based, so we’re not going to be experiencing too many performance issues on it, as is the case with running this plug-in.
The Fab Filter Pro-L is definitely one of the most versatile limiting plug-ins that

I’ve used before. It goes way beyond what your average limiter will offer. I’ve used this pretty much exclusively on the master fader of sessions for getting a little increase in volume and cutting off the volume at a certain point. The sound of the plug-in is nothing short of outstanding, and with so many options possible it really leaves it up to you to get the job done. The price is about somewhere in the middle, but it’s definitely better than it’s price would suggest. If you don’t know about Fab Filter and the Pro-L plug-in, you’re definitely going to want to check this one out.