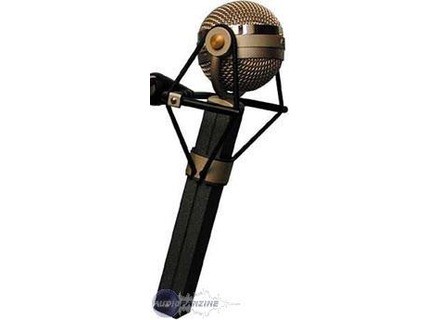 Rapport qualité/prix : Excellent
Voir les autres avis sur ce produit :
Afficher la traduction automatique
Afficher l'avis original
This is a very strange mic at first glance. It looks like a wimpy podcasting mic, but don't be fooled! This is a very serious contender in the studio large diaphragm condenser range. This mic has its limitations, but it has some nice unique features too. First of all the design is really unique and cool to look at, which may please some and others won't care. It has an integrated shock mount for the capsule, which I haven't seen on any other mic and is very convenient for when you need to get a mic set up quickly. The capsule and diaphragm are actually located on a rotating clamp, so that after you get the microphone body itself positioned nicely, you can then rotate the capsule to fine tune your mic placement even more. This feature may seem simple, but you would be surprised at how handy it is for minute adjustments like when you are recording acoustic guitar that actually have a big impact. The polar pattern is limited to cardioid though, so this mic does lose a couple of points there. Overall the sound of this mic is up to par with other Blue products, which is to say the mic sounds very nice. The mic has very low self noise so your recordings come out as clean as the weakest link in your chain. The mic also comes with a nice box for storage.