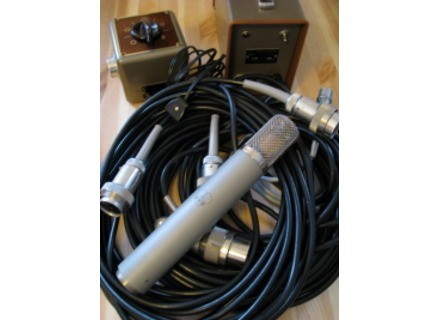 Voir les autres avis sur ce produit :
Afficher la traduction automatique
Afficher l'avis original
These studio mics are tube condenser mics that work really well. They need a power supply to operate. They are great for picking up a wide range of frequencies, which makes them pretty useful in many contexts. Every studio I've been in that impressed me had at least a pair of these mics. I've never heard of anyone using them live, which makes sense because they are very delicate mics that probably wouldn't be very effective live.

I've been using these mics for over six months. I work in a studio that mostly records jazz and world music artists, so we have many people coming in to use our Steinway B piano. I've used them mostly on this acoustic piano with great results. I tend to use the in pairs because of this. They really pick up all the frequencies of the piano with great detail, and get all the dynamics without having to be cranked (thus preventing clipping pretty well.) The tone is also very rich and detailed without being shrill. It makes the piano arguably sound better than it does acoustically. In other instances, I've used it on vocals, which usually works well enough for me. It's especially good for singers who have a large range because it sounds good on almost anything. I used it to record a harp once and thought it was the best mic we had at the studio to do this. It's really pricey, so only studio owners who want to get the best sounds should use it. Home studio users would be advised to avoid it unless they have a large amount of money to throw around, although even then you'd probably pick up too much noise at home anyway. It's certainly a great mic, but because it's so expensive I can't say it's got a great value for the price. I haven't purchased one of my own, but if i was a studio owner and looking to buy good mics, I would certainly pick these guys up.
Ces micros de studio sont des micros à condensateur tube qui marche vraiment bien. Ils ont besoin d'une alimentation pour fonctionner. Elles sont idéales pour ramasser une large gamme de fréquences, ce qui les rend très utile dans de nombreux contextes. Chaque studio j'ai été dans ce qui m'a impressionné eu au moins une paire de ces micros. Je n'ai jamais entendu parler de quelqu'un en utilisant les vivre, qui fait sens parce qu'ils sont des micros très délicate qui ne serait probablement pas très efficace en direct.